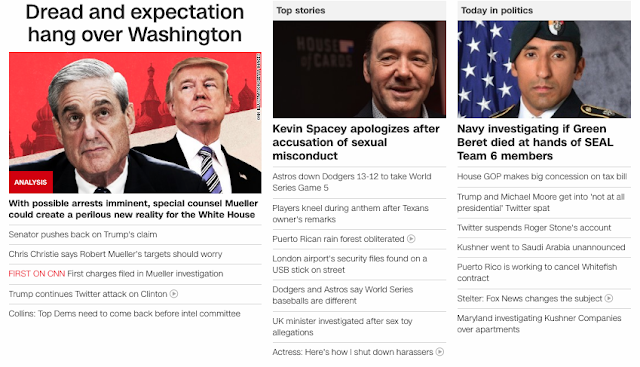 HA!  DONALD TRUMP AND THE HOUSE OF CARDS ACTOR KEVIN SPACEY!  PLUS THE HEADLINE ABOUT DREAD OVER WASHINGTON!

THIS HEADLINE COMES OCTOBER 29, THE 88-YEAR ANNIVERSARY OF THE COLLAPSE OF WALL STREET!!!!

I want you to think about how stupid this world is.

When something happens to Trump, that will cause the market to fall.  But why should it?  Why should the orange oompa loompa that does nothing but tweet, have any barring on anything?  Don't you see what an obvious bullshit contrived shot it always is?  It doesn't even making fucking sense, but people go along with it.  I wrote about Trump and House of Cards and the fall of Wall Street in light of Trump being selected on 11/9, the anniversary of the fall of the Berlin Wall...

Quicken Loans Arena, the (216), where he had his convention... and the Quicken Humpty Dumpty commercial... its all in the book... and maybe I'll get to add the latest big deal in the next 48 hours before it is finished.... hmmmm....

Don't forget Donald Trump is Mr. 58, and the winner of the 58th U.S. Presidential Election, who announced he was running from the 58-story Trump Tower and who hired the 58-year-old Steve Ray for Inauguration Day.