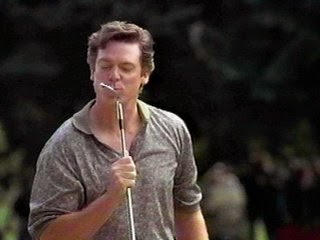 I recently wrote about how Adam Sandler is able to successfully predict world tragedies.  This post doesn't have to do with that, but it does show how often "33" is coded into movies and how movies mimic reality.  If you have never seen the film Happy Gilmore, you could be missing out on one of your favorite comedies.  The film was released in 1996, and since that time has made me laugh at least a few times.  Personally, I've always thought that Shooter McGavin, the antagonist of the film, played the best character asshole their ever was.  In the film, he has a name with a Gematria of "33", as do many star athletes in real life.  In the film, Shooter McGavin is supposed to be one of the best golfers around...

In total, what I'm saying is that none of this is a coincidence.  This is how the names are decided.
PS, Never fall for the ninth hole at nine...
Posted by Zachary K. Hubbard at 9:33 AM