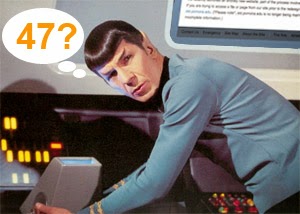 Per Wikipedia, let us quickly examine this important information pertaining to the number 47 and the television series Star Trek.  The purpose of this post is to validate everything I have been writing about since I started this blog.  Now without further ado, the Wikipedia information:


Forty-seven has been the favorite number of Pomona College, California, USA, since 1964. A mathematical proof, written in 1964 by Professor Donald Bentley, supposedly demonstrates that all numbers are equal to 47.[5] However, Bentley offered it as a "joke proof" to further a popular student research project that listed real and imaginative "47 sightings". Bentley used the invalid proof to introduce his students to the concept of mathematical proofs.[6] The proof used limits to show that the sum of the two equal sides of an isosceles triangle is equal to the base side. Bentley chose forty-seven as the base side, but he could have used any number.
Joe Menosky graduated from Pomona College in 1979 and went on to become one of the story writers of Star Trek: The Next Generation. Menosky "infected" other Star Trek writers with an enthusiasm for the number 47.[7] As a result, 47, its reverse 74, its multiples, or combinations of 47 occur surreptitiously in almost every episode of the program and its spin-offs Star Trek: Deep Space Nine, Star Trek: Voyager and Star Trek: Enterprise.[5][8] Forty-seven might be mentioned in dialogue or appear on a computer screen, for example:
J. J. Abrams, who produced and directed Star Trek, frequently uses the number 47 in his productions, including episodes of his TV series Fringe. In the Season 1 episode "Bad Dreams", aired shortly before the release of Star Trek in theaters, Nick Lane's bulletin board features a large centrally-located sheet of paper with only the number 47 in huge typeface. It recurs again in the series, for example 47 minutes being the maximum amount of time for a time chamber in the series to last, and there being exactly 47 shapeshifters. J.J. Abrams continues to incorporate 47 into movies and series he produces and directs. There are many 47's in Fringe, Alias, and recently in Revolution, of which Abrams is a producer. In the Season 1 episode "Soul Train" of the series Revolution, the characters are involved with an old train engine where the engine number happens to be 47.[10]

The information concerning Brannon Braga is of considerable of importance, as it validates the method of converting letters into numbers, something that is not unique to his work or Star Trek.  Brannon Braga is currently the executive producer of the FOX hit "Cosmos", which is hosted by Neil deGrasse Tyson.
The show is mostly a retelling of the Big Bang, with excerpts from Darwin and Evolution.
Back to Star Trek, also notice that it was "Harry Kim" who lived in Apartment 4G, aka 47.
Here is a website keeping track of the 47s in Star Trek, and here is another.  To date, I think this blog is the only website that has caught the 47s in other programs, from Breaking Bad to Cinderella.
Personally, when I think of 47, I think of 4/7, or the 4th of July.
Posted by Zachary K. Hubbard at 3:11 PM