44: The Number of Assassination, and the 9th President, William Henry Harrison 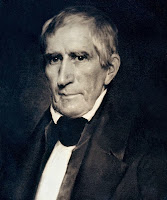 If you have not read my first post on the number 44 and how it corresponds with political assassinations from Julius Caesar, to Honest Abe, to MLK, to the WTC buildings, to possibly the 44th President, Barack Obama, please read about it here.

While doing further investigation into the date April 4th, I came across the shortest United States Presidency term in the history of the country, that of William Henry Harrison, who died on April 4th, 1841, exactly one month into his term.  Harrison was the 9th President of the United States, and first member of the Whig Party to become President.  The term "Log Cabin Republican" has roots in his 1840 Presidential Campaign, in which Harrison and Vice President Taylor used the images of 'Log Cabins' and 'Hard Cider' to appeal to the common man of those times.  When Taylor assumed the Presidency after Harrison's death, he would go on to help the United States expand its territory into what would become Texas, under 11th President, James K. Polk.

President Harrison's official cause of death is pneumonia.   He was the first President of the United States to die while in office.  What seems most curious about his death, is the date it happened on, April 4th, or 4/4, or 44.  Again, if you have not read my post on 44 and assassinations, please do so here.

The following is a list of all of the United States Presidents who have died while IN office.