Today is the strangest day of my life. Do you believe in coincidences? Do I?

Today is November 18th, 2013.  In some parts of the world, today's date is written as 2013-11-18.  Keep that in mind for later.  Anyhow, I am not a man of the Bible.  I was raised a Christian, but I lost my faith long ago, as a child.  Until I lost my faith, I prayed probably harder than any child who was my age alive.  I knew this world was sick and I wanted it to get better.  I don't know how I knew this, looking back, -perhaps it was having a much older sister who always helped keep me be ahead of my time, along with my mother.  Without those two, I'd be a different person, I'm quite sure of this.  But back then, I would pray every night the world would be fixed from war and starvation and suffering.  That's what I prayed for.

Recently however, I have become fixated on this date, November 18th, 2013.  The more I looked into it, the more I had a bad feeling about it.  Perhaps it is nothing more than a feeling, a mistaken thought.  Or perhaps not.  Anyhow, my current level of paranoia led me to fulfill an idea I have not acted on for years.

In 2010 or so, I got the idea to make a survivalist backpack, with all that you would need to survive a fallout of some sort.  Recently, I gathered a few small items to start the process, but today I went out and bought the main components of such a kit, so that I could build and market a "prototype" for a business.  When the cashier rang up my total, after buying the components, the total came to $666.59, which at first, I thought had to be a mistake.  But we went through it item by item and it was correct.

Keep that bill calculation of $666.59 with this Bible passage, that corresponds with today's date.


The Beast out of the Earth

11 Then I saw a second beast, coming out of the earth. It had two horns like a lamb, but it spoke like a dragon. 12 It exercised all the authority of the first beast on its behalf, and made the earth and its inhabitants worship the first beast, whose fatal wound had been healed. 13 And it performed great signs, even causing fire to come down from heaven to the earth in full view of the people. 14 Because of the signs it was given power to perform on behalf of the first beast, it deceived the inhabitants of the earth. It ordered them to set up an image in honor of the beast who was wounded by the sword and yet lived. 15 The second beast was given power to give breath to the image of the first beast, so that the image could speak and cause all who refused to worship the image to be killed. 16 It also forced all people, great and small, rich and poor, free and slave, to receive a mark on their right hands or on their foreheads, 17 so that they could not buy or sell unless they had the mark, which is the name of the beast or the number of its name.
18 This calls for wisdom. Let the person who has insight calculate the number of the beast, for it is the number of a man.[a] That number is 666.

Isn't that bizarre?  Look at those receipts. 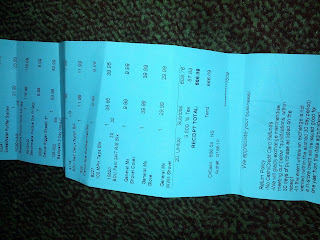 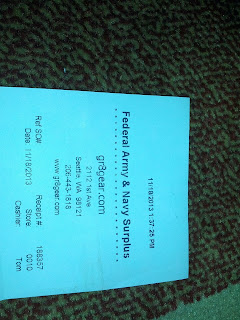