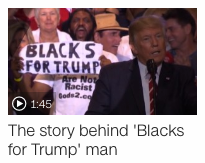 I almost made a video about this during the Arizona speech.  As the CNN story says, this man continues to show up behind Donald Trump in speeches, just like the Jewish goon Gary Grinberg, or Gary the Numbers Guy (who trolls this blog under multiple accounts). 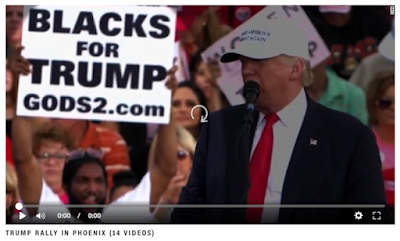 During the speech the baiting by 'BLACKS FOR TRUMP' even caused me to visit 'Gods2.com'.  It is an anti-Hillary Clinton website, go figure.

Anyway, the obvious truth about the Blacks for Trump guy is this:  He is a retard, likely from the criminal justice system, that is being used as a walking billboard during Trump rallies, as some sort of attempt to prove that Trump isn't a racist, even though he is the same guy who bombs on brown people with his mouth 24/7/365.    Remember, on the trail Trump said a black guy at his rally deserved the beating he got from the white supremacists in the crowd, he also spews much hatred for Mexicans, saying "they're doing all the raping", and continually emphasizes the Jew lie of "ISIS".  What sensible black person would stand for Trump?

If you watch 'Blacks for Trump' guy during Trump's speeches, you can see that something is wrong with him.  He is talking non-stop, not paying a single bit of attention to Trump, and only focused on promoting his sign.  I wouldn't be surprised if he is in a locked room somewhere right now, waiting for the next Trump rally to be let out.
Posted by Zachary K. Hubbard at 2:08 PM