Notice this year's NFL Draft takes place in Chicago.  This is curious because it comes 88-days after Super Bowl 49 on February 1, 2015, and Chicago is just off of the 88th Meridian, barely on the 87th.  Further, Illinois is the 21st State and Super Bowl 49 closed out with some major '21' connections as I have well documented.
With regards to that '49' theme, this year's coming Super Bowl will be hosted in San Francisco, home of the 49ers.

Also, notice that the draft will conclude on 5/2, a number of much significance from Super Bowl 49. 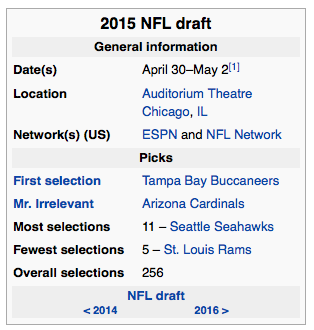