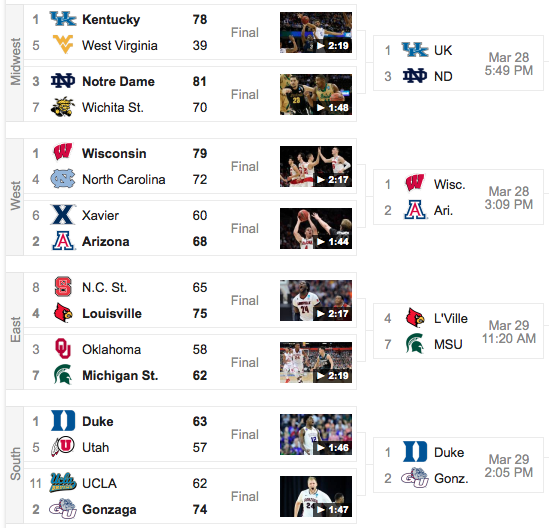 What did I find most curious about the Sweet Sixteen?

First, let us begin with Kentucky, who has had much coded numerology in their season thus far.  They won by a score of 78-39; notice that 78 is exactly 39 multiplied twice.  Further, it has been 39-years since the last perfect season, which was achieved by Indiana.  Where is this year's championship?  Yes, it is in Indiana, and it will be played on April 6, the 96th day of the year.

Second, Notre Dame advanced, with "81" points, like the word 'Wizard'.  Please see my prior post on head coach Mike Brey and the death of his mother... very curious.

Third, Wisconsin won on a date with '44' numerology.  Wisconsin equals 44 in Pythagorean Gematria and ESPN has had Wisconsin's #44 on their set multiple times already since Wisconsin won the game...  Too bad most fans don't know numerology or Gematria.... it should be noted that the Final Four will occur on April 4 this year.

Fourth, Arizona won again, and they too have been getting many numerology tributes.  I suspected they would advance over Xavier, and they did with 68 points, another curious number.

Sixth, Coach K and Duke advanced over Utah; Coach K was born in '47, on a curious date... what else is new?

Seventh, Louisville and Pitino advanced.  Pitinio has become the most sickly looking coach in all of college basketball and was once the coach of Kentucky.  Someone get this man a doctor.

Eighth, Gonzaga has finally made it to the Elite 8, winning with the curious sum of '74'.  Recall the Sports Illustrated cover that featured #33 and also had big headlines about Kentucky.  If the championship game is to be Gonzaga vs Kentucky (I'm not saying it will), remember the Sports Illustrated cover mentioned previously on this blog.
Posted by Zachary K. Hubbard at 11:11 AM