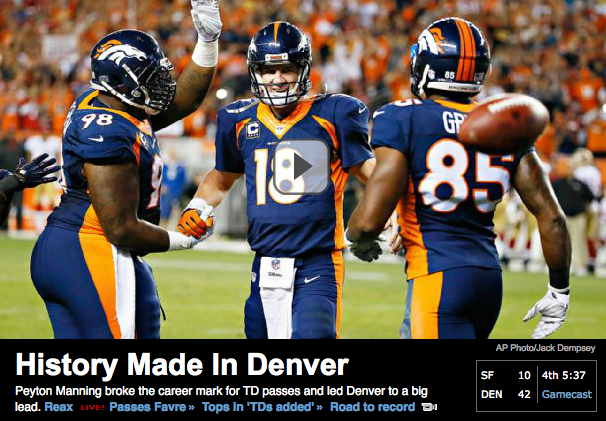 There are two key ways to extract the numerology of today's date, they are as follows:

Today Peyton Manning set the record for TD passes by an NFL Quarterback, surpassing Brett Favre, a QB who I wrote about earlier today...

What is interesting is that Peyton Manning wears the number 18, and the numerology of today is 18 as shown above.  The other numerology for today is "7", the number corresponding with opposing quarterback Collin Kaepernick of the San Francisco 49ers.

What I'm wondering is if this matchup was scripted by the numbers and as such intentionally.  Perhaps even Manning's record breaking night was scheduled for tonight many moons ago.  Perhaps it is even why he had to miss a season two years back, just so that the record breaker could line up for this moment in history, in the lone month with "33" Gematria, in a league centered on the number.
My instincts told me the 49ers would win this game because of all of their "seven" associations, but it seems Peyton Manning and the #18 stole the show.  Congrats to him, achieving his very likely "rigged the entire way" accomplishment.  I've often wondered if defenses are told to play "lax" against Peyton Manning.  It has always seemed his receivers are way more open than most others that play for teams he isn't on, often by distances that are incomprehensible.  For me, this Gematria thing brings it all into focus.

One last point, in the beginning of the game the 49ers kicker missed a "51-yard field goal" and Peyton Manning finished the game with a record 510 TD passes, notice the number 51 in both.