This brings it all together.

-The narrative with the flag
-The narrative with the national anthem
-The story of the Jaguar killing the zoo animals in New Orleans, July 14 -  National Anthem = 147
-The Jacksonville shooting, August 26, 2018, 43-days later
-Francis Scott Key penning the anthem in Baltimore, where the shooter was from
-Key penned the anthem September 13, and the Jacksonville shooting happened on John Madden's 139th day of being 82-years-old - Flag = 26 / 82 (Shooting on the 26th)

And for the kicker, 'Battle of New Orleans' sums to 99.

And don't forget about #9, Drew Brees.

The war also ended on the 49th day of the year, and Super Bowl 53 will be the 49th Super Bowl of the modern era.

*KEEP IN MIND, THIS DOES NOT MEAN THE SUPER BOWL WILL BE THE JAGUARS AND SAINTS, BUT THIS RIDDLE IS NO DOUBT IN PLAY AND A TRIBUTE TO WHAT IS TAKING PLACE IN THE NFL THIS SEASON, AS WELL AS IN THE NEWS.  WE WILL CONTINUE TO WATCH WHAT UNFOLDS. 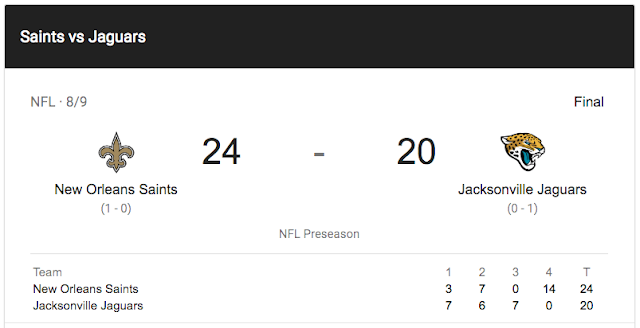 89 is the 24th prime and the Saints won with 24-points on the day that 24-teams played their first presesaon game of the NFL season.  They also beat the Jaguars who are in their 24th NFL season.
Posted by Zachary K. Hubbard at 8:27 PM