He died a span of 8-months and 8-days from Trump's 38th birthday.

Notice the death of his uncle was in '85.  That connects to Donald's name, as well as the brother he lost in '99.

Trump's uncle investigated Tesla, who some claim had unlocked "time travel" technology.  It reminds that Biff's character in Back to the Future, is related to Trump.

From John George Trump's 77th birthday, to his death, was a span of 185-days.

The date he died, February 21, was the 52nd day of the year, reminding of how Trump became President Elect 52-years after attending the Jesuit school, Fordham.


The name John G. Trump also has multiple connections to the number 47, the even bigger number to the presidency than 47.

Again, John G. Trump.  And the G under the 47-degrees of the Masonic compass. 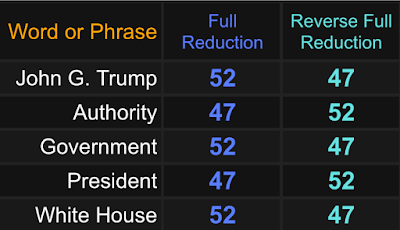 77 is the Meridian Washington D.C. is on.

This bit about him investigating Tesla after his death is fascinating too.

He died 42-years after conducting those investigations.

https://en.wikipedia.org/wiki/John_G._Trump
Posted by Zachary K. Hubbard at 9:46 AM