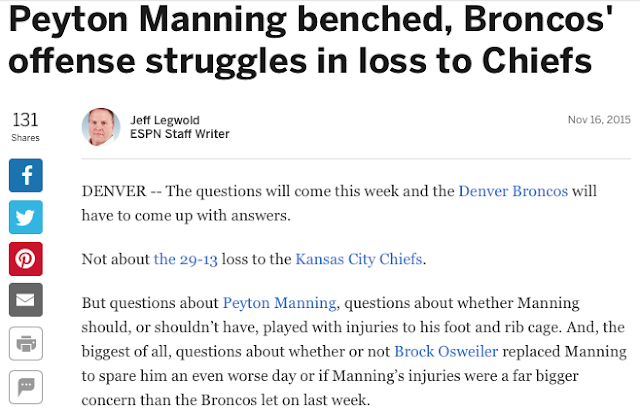 Notice the way Manning's season went.  In Week 8, he tied Brett Favre's landmark of 186 wins as a QB, while playing the Packers, the team Favre is best remembered with.

Then the following week, he loses in Indianapolis, against the Colts, the team Peyton Manning played the majority of his career with, 13-seasons.  In light of 13, it is no coincidence he was replaced by "Luck".  Recall how Luck missed his first game as a pro on the date with '13' numerology, where the game went to OT 13-13...

After losing to the Colts, he was replaced by Osweiller in the following week, after throwing his 322nd pass.  What do we know about the number 322?

Recall, Peyton Manning is born on the 83rd day of the year and is playing in Denver, where John Elway, former QB of the Broncos, is executive, and was drafted in the class of '83.
Posted by Zachary K. Hubbard at 10:25 AM