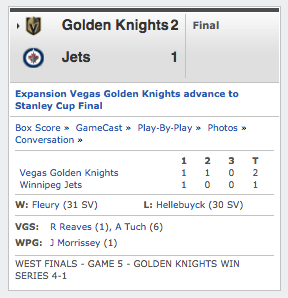 Winnipeg's team was once in Winnipeg before moving to another city for 24 consecutive years.

And with Vegas advancing, it is time to go back and review our notes about the October 1, 2017 shooting.  Some followers showed prior to the NHL season beginning how that lined up with the new Las Vegas NHL team which is now going to be playing in the Stanley Cup Finals, either against the Tampa Bay Lightning, or Washington Capitals, who are tied 3-3.
Posted by Zachary K. Hubbard at 6:44 AM