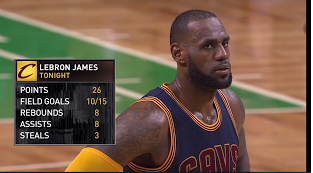 They show LeBron with 26, while discussing him being on the verge of passing Jordan.

Then the next series down the court, he nails a 3, passing Jordan, while having 29-points scored in the game. 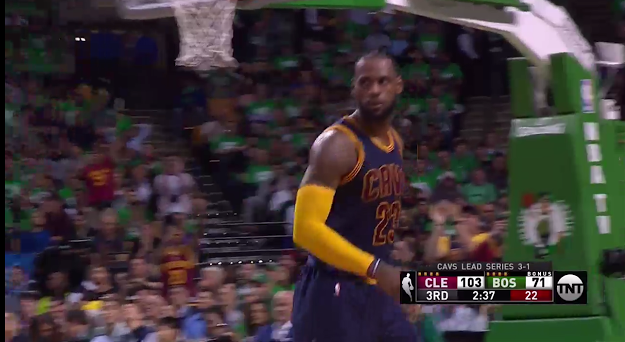 Again, last year the Cavs won Game 7 of the NBA Finals in the Cavs 103rd game of the season.  103 is also the 27th prime, and LeBron scored 27 points in Game 7, just hours after Anton Yelchin dropped dead at 27, with birth numerology of '103'.  ...27 days later, Nate Thurmond dropped dead at 74.  Consider that tonight, LeBron came into the game 27 points behind Jordan.

ALSO, the Celtics were stuck on 71-points at the time of the accomplishment.  Again, this is the 71st season of the league, and Celtics sum to 71 in Gematria.  Ohio is also the 17th state, the reflection of 71, and the Cavs were the 17th team to join the NBA.

To close out the third quarter, where LeBron set the record, the Cavs finished with 109-points, the 29th prime number...

Notice they also lead by 35-points.