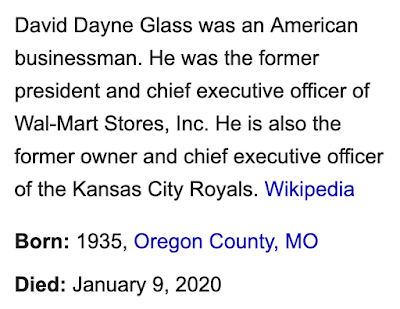 Also, David Glass, connected to Kansas City, died on Bart Starr's birthday, and all years there have been riddles in the NFL with Kansas City and Green Bay.  Again, those teams faced each other in Super Bowl 1...

For one last point, the name David Glass connects to 'Kansas City Chiefs' in two ways.

Don't forget Patrick Mahomes beat Len Swan's record November 11, 2018, 64-weeks before the Super Bowl, on the nose, and his girlfriend's dad died that day in the stands.
Posted by Zachary K. Hubbard at 6:28 PM