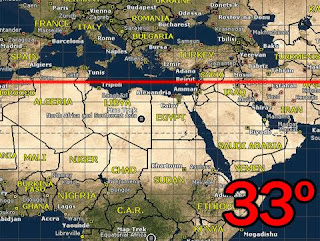 In recent history and at this moment, the majority of the nations we are at war with, are on the 33rd parallel (See picture).

These are the cities of the world that rest directly on the 33rd parallel: Islamabad, Pakistan, Baghdad, Iraq, Phoenix, AZ, Long Beach, CA, Atlanta, GA, Birmingham, AL. Notice anything interesting?

Do you think this 33 stuff is all coincidence? Do you think that 33 years after 9-1-1 was made the national emergency dialing code, and WTC construction began (both in 1968), the attacks of 9/11/2001 were a coincidence? Isn't this fascinating?  This is only the tip of the iceberg, just ask Michael Hastings, who blew up earlier this year in his 2013 Mercedes, at the age of 33, in Los Angeles, near the 33rd parallel.  For those not in the know, he was one of the most important journalists living.  Read about his bizarre death here, and what Richard Clarke had to say about the government being able to control our vehicles by satellite.