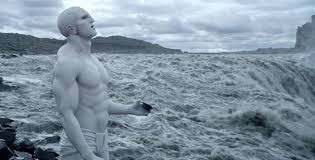 On June 8, 2012, Ridley Scott's Prometheus was released in the United States.  The movie is about a futuristic space mission, in which a team of scientists travels to the planet LV 223, located a half-billion miles from Planet Earth, in search of the origins of human life.

Let us examine the numerology of Planet LV 223.  L is the twelfth letter in the alphabet.  V is the twenty-second.  The numerology of L = 12 = 1+2 = 3.  In other words, LV could equal 322, and the planet LV 223 could otherwise be represented as 322 223.  Notice the number 223 is the number 322 reversed.  Also, let us remember that 322 is the code for Skull and Bones, the powerful Secret Society at Yale, which Tim Russert twice referenced to President George W. Bush and Presidential hopeful John Kerry, before he soon after passed from a heart attack.  It is also a number carefully placed in many other movies dealing with apocalyptic, end of the world scenarios, which is exactly what Prometheus is.

Aside from this film, Prometheus is a Greek mythological figure credited with creating man from the clay of earth, and teaching them to use fire.  In doing so, he defies Zeus and is punished by being bound to a rock on Mount Olympus, where an eagle feeds on his liver daily.

With regards to Olympus, on March 22, 2013, the movie Olympus Has Fallen was released, in which the United States is nearly destroyed after a deadly attack on Washington D.C.  Notice the day, 3/22, or 322.