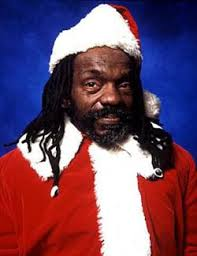 If you're one of the sheepish masses, you might very well be caught up in the Santa Claus Race Debate that is extremely trendy on cable television, Facebook and popular media.  It is important to note that the debate began on FOX News, aka 666 News, when *news anchor* Megyn Kelly broke the story of a complaint about Santa being portrayed as white by a woman named Aisha Harris.  If you'd like to watch the initial breaking of the story, the YouTube video is at the bottom of this article.

What I find curious about Megyn Kelly, are her initials, MK.  It makes me wonder, is it even her real name?  If you're not familiar with Megyn, she gained fame and status with FOX News during her routine coverage of the fake school shooting at Sandy Hook Elementary School in December of 2012.  Since covering that hoax of a story, she has been complicit in other government/media lies; from the Boston Marathon Bombings to the Naval Yard Shooting to the most recent Colorado School shooting on the one year anniversary of the Sandy Hook Shooting, just down the street from the Columbine School Shooting of 1999.

As for Megyn Kelly''s MK initials, it reminds me of a very special government program called MK Ultra.  MK Ultra was a program that was ran by the CIA from 1950 through the mid 1970's, until it was publicly disclosed in 1975 by the Gerald Ford Commission.  In 1977, a Freedom of Information Act caused the government to release more than 20,000 documents pertaining to the program.  It was also disclosed that MK Ultra was implemented at 44 public universities.  If you read this blog, you are well aware 44 is the number of assassination, and that is exactly what MK Ultra is about, mental/psychological assassination.  During the years the program was run by the CIA, human test subjects from the United States and Canada were manipulated for the purposes of altering brain functionality and controlling thought.  The discoveries made on these test subjects, was then used through illicit and covert means on the population of the United States, which is still ongoing today.

Ask yourself, are you someone who thinks for yourself, or someone who lets others think for you?  If you find yourself talking about Santa's race, Duck Dynasty, or other senseless media reported stories that are always ongoing, you might very well be a victim of MK Ultra.  If you're one of these people, don't blame yourself, you're a victim of a very powerful, well spread, scientific operation.  Further, MK Ultra is not the lone program operating on behalf of our CIA and government that is trying to control and condition how we think.  Since 1913, our government has publicly disclosed that they have a Psychological Operations Program dedicated to controlling our thoughts and opinions with government sponsored propaganda.  That means this has been ongoing for at least 100 years, and with each passing year it becoming more sophisticated, more targeted and more scientific.

I'll close this awareness session of a post with famous words from Timothy Leary, "Think for yourself, question authority."