One Second After by William Forstchen and the Lunar Eclipse Cover 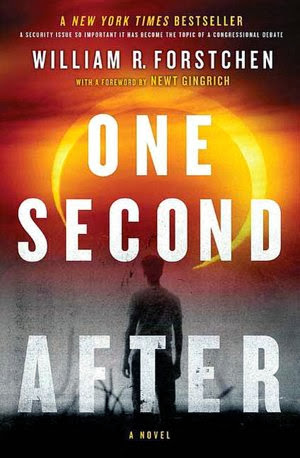 The story One Second After is a tale of the end of the United States of America by EMP strike, or electro-magnetic-pulse.  In such a strike, a nuclear warhead detonating miles above the surface of the earth, destroys all things electrical forever including automobiles, which is exactly what happens to the United States as well as much of the rest of the world, in this currently fiction title, One Second After.  The reason I say currently fiction- is because fictional books written in the past, turned out to be non-fiction within years after their writing.

Years later, in 1991, Martin Keating, brother of then Governor Keating of Oklahoma, would write the story The Final Jihad.  In this story, a Tom McVey, who is outraged with the government, bombs the Oklahoma Federal Building, takes out a lone TWA flight in New York, and later flies a plane into the World Trade Center building.  Keep in mind, 1991 is four years before the Oklahoma bombing, seven years before TWA Flight 800, and a decade before the events of September 11.  Do you think as the brother of the Governor, he got his hands on some inside information?

In One Second After, Newt Gingrich writes the Foreword warning that this book may not be fiction before long.  The Afterword is written by a Retired General, who gives the same warning, saying it is "not a matter of if, but when"... just as Janet Napolitano did when she was resigning from her post as Head of Department of Homeland Security in August of 2013.

The setting of One Second After is in North Carolina, just as the hit show Revolution from NBC is.  Both currently fictional stories have to do with a massive power outage, forever changing society for the more violent and sufferable.  What I find most curious about the book One Second After, is the cover.  After reading the story in it's entirety, I know there is no mention of an eclipse in the book, at all.  Yet, on the cover, a lunar eclipse is clearly shown.

From doing research on this topic, a topic you could call "the next major false flag by the powers that be", I have come to learn about the history of "four blood red moons" falling in line with Passover and Sukkot over the course of a two year period of time, and what that has meant for people of the Jewish faith.  The last three times it has happened, have resulted in the Six Days War, Israel receiving it's Statehood, and the Spanish Inquisition, in which the Jews were banished from Spain.  At this current moment in history, there is much tension between Israel with Syria and Iran, amongst other Middle Eastern nations.  The writing is already on the wall for major events to take place within the region, as Israel has been bombing Syria throughout much of the year 2013, and shouts for war have been ever increasing from Israel's government.

Let us hope history doesn't foretell what is coming in the years 2014 and 2015.  Further, let us hope that the lunar eclipse on the cover of One Second After is not a sign of when such currently fictional events are set to become reality.  Last, let us hope this same book is not like titles from the past, such as Futility and The Final Jihad.  With that said, hope can only do so much.  If you've been paying attention to the course of history, it does seem like trouble is ahead in the very near future.  In that regard, you should consider all this information very carefully, and think about how you could best protect yourself in such an event.  If such an event is unfathomable to you, go to your library and reserve a copy of this story.  It is told in a human and emotional way, that seems very realistic.  Of course none of us would ever want to live through such an experience, but as you find out from the main character in this book, being prepared is the most important fact to your survivability.

Last, you should know when the first of these four blood red moons will occur.  It will be on the one year anniversary of the Boston Marathon Bombing, which is April 15, 2014.  This date also happens to be when Abraham Lincoln died of gunshot, when the Titanic sunk, and the last night of the 33 night tribute to the collapse of the World Trade Center.
Posted by Zachary K. Hubbard at 11:25 AM