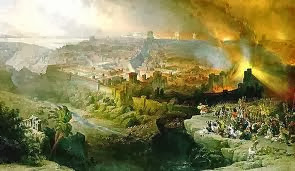 The year is 1313 BCE. The Israelites are in the desert, recently having experienced the miraculous Exodus, and are now poised to enter the Promised Land. But first they dispatch a reconnaissance mission to assist in formulating a prudent battle strategy. The spies return on the eighth day of Av and report that the land is unconquerable. That night, the 9th of Av, the people cry. They insist that they'd rather go back to Egypt than be slaughtered by the Canaanites (Canaan is modern day Palestine/Israel). In the Bible, God is highly displeased by this public demonstration of distrust in His power, and consequently that generation of Israelites never enters the Holy Land. Only their children have that privilege, after wandering in the desert for another 38 years.

In history, the 9th of Av, or Tisha B'Av, has been a significant date of tragedy for the people of Israel.  This coming year, the 9th of Av will fall on August 4 and 5, 2014.  August 4, is also President Barack Obama's birthday.  For a list of significant events on the 9th of Av, please see the following table:


What is interesting to consider further, is that Passover will coincide with a lunar eclipse, which is another event of peculiar interest to the Jewish faith, as it is discussed in their holy text.  It is also an event of rare occurrence (2014 will be the eight time since the year 1 AD) that has corresponded with major events in the history of Israel and people of the Jewish faith; most recently, the founding of Israel.  Please read more about that here.

This coming August 4, 2014, will also begin the first of seven planned tributes to World War I in Britain, as declared by David Cameron on October 11, 2012, or 10/11/12.  As you can see from the table above, World War I will have begun exactly 100 years earlier, on the 9th Day of Av, in the year 1914.
For more on this historical date, and the tragedies it has endured, please watch the following YouTube video, and read this article about the destruction of the temples.