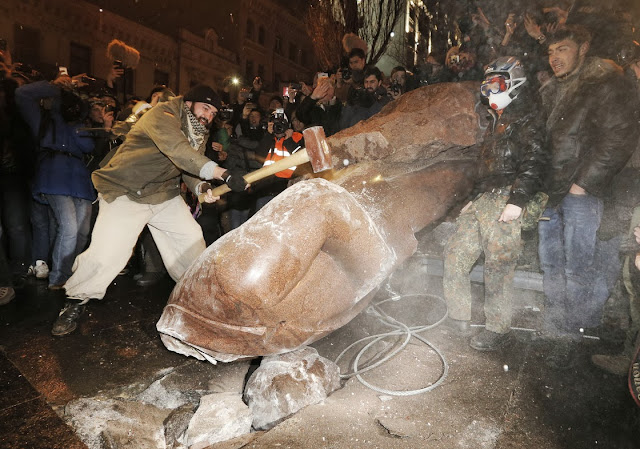 On December 8, 1980, John Lennon, of the world famous Beatles, was assassinated.  11 years later to the day, the Soviet Union would be dissolved.  22 years after the end of the Soviet Union and 33 years after the assassination of John Lennon, the statue of Vladamir Lenin, which was standing in Kiev from the end of World War II, until today, was pulled to the ground and destroyed.  John Lennon's assassination was news that grabbed the attention of the world, as was the dissolving of the Soviet Union, and more recently- so is the destruction of the famous Bolshevik Revolution and World War II era leader's statue.  Please notice the spacing of 11 years and 11 year multiples between these historical events.  1980, 1991, 2013.  Intervals of 11: 11, 22 and 33 are also known as the "Master Numbers".

1953- Eisenhower's Atoms for Peace speech is given, granting nuclear technology information to education, health and research institutions across the globe
1980- John Lennon is assassinated in suspicious fashion
1991- Russia, Belarus and the Ukraine agree to dissolve the Soviet Union, and create the Commonwealth of Independent States
2004- The is Cuzco Declaration is signed, creating the South American Community of Nations
2013- The Statue of Lenin which was erected 66 years earlier in 1947, is destroyed during the Ukrainian protest which began on November 21

What these events all have in common, is major one world government symbolism.  The destruction of a statue from a major leader of the past, is to say goodbye to the pages of history.  To spread nuclear technology in terminology of 'Atoms for Peace', is to spread global destruction in ways no different than George Orwell's 'new speak' in 1984.  To kill the world's most famous singer, who was opposed to government and the New World Order, and who once famously stated "our society is run by insane people for insane objectives", is to kill a voice of reason that is against the globalist agenda.  To destroy the Soviet Union is favor of the Commonwealth of Independent States, is to reorganize the power structure of the world in favor of the globalist powers that be.  The same can be said with the Cuzco Declaration, coming 13 years later, making South America much like the European Union and Commonwealth of Independent States.  It begs the question, how much longer until we see a new 'North American Union' with Canada, the United States, Mexico and maybe more?

Currently, the footage of the Lenin statue being pulled to the ground, does not show what the cables are connected to, causing the toppling force of the statue.  The collapse of the Lenin statue gives me deja vu of Saddam Hussein's statue being smashed to the ground in Baghdad, Iraq, on the curious date of April 9, 2003, now more than a decade ago.  If you do not recall this event, it was first reported as being destroyed by a mob of protesters in the city of Baghdad.  Later, it was disclosed that the statue was actually destroyed by the U.S. military, and the use of an M88 Armored Recovery Vehicle.  While the mainstream media admitted this fact months after the actual event, the damage of their propaganda had long since passed, and the truth of the event was lost to the masses.

The point of all this is, understand the symbolism and meaning of these events.  Also, do not dismiss the dates of these events and how they align.  The Illuminati; the powers that be and who strive for a one world government; those who govern from the shadows; those who want the world under their thumb; are very ritualistic, and in their ritualism, their deeds can be exposed.  Also, if you doubt the powers that be are deliberately trying to manipulate you with stage managed events, through their powers of mass persuasion, such as the global mainstream media, which is controlled by the Zionists who also control the majority of the worlds banking and lending institutions and governments, please revisit the destruction of Saddam Hussein's statue, on April 9, 2003, and how the story was a 100% media manufactured event, full of nothing but lies and deception.  After reflecting on that, keep your eyes pealed for what details are later released regarding the destruction of the Lenin Statue in Kiev as the weeks unfold. 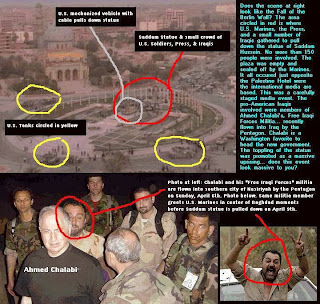