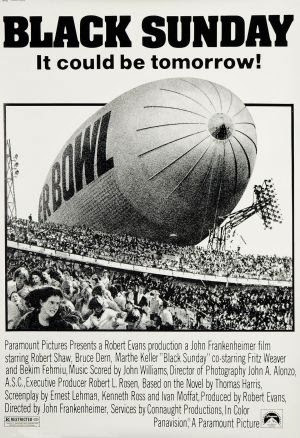 Have you seen the movie Black Sunday?  It is a cult hit from the year 1977, released on a March 11.  The movie runs 2 hours:23 minutes long, or the number 322 backwards.  What the movie pertains to, is the terrorist organization "Black September", who is responsible for the terrorist acts at the Munich Olympics in the summer of 1972.  In that tragedy, their were 11 people murdered, 9 of which were held as hostages for a period of time before they were killed.  The hostage takers demanded that 234 Israeli's be released from jail before the hostages were murdered.  2+3+4 = 9

In response to the attacks, which killed 11 members of the Israeli Olympic team, the Israeli Government declared Operation Wrath of God in which Mossad agents, the equivalent of the United States CIA (but maybe a little more hardcore), were deployed internationally to assassinate "Black September" members.  Black September was to Israel from the years 1972-1992, possibly longer, what Al-Qaeda has been to the United States since the September 11, attacks in 2001.

The movie Black Sunday, is about Mossad agents deployed in the United States, to stop a Black September attack against the United States at the Super Bowl, in which the Pittsburgh Steelers are playing the Dallas Cowboys.  This is the third time I have seen  the Steelers attacked in a football game, and in no other movies have I ever seen a football team being attacked besides the teams the Steelers were playing against which is Dallas, Baltimore and Unknown.  More recently, the Sum of All Fears was released, in which a nuclear bomb goes off at an NFL game where the President is attending, and even more recent than that, the entire field explodes at Pittsburgh's Heinz Stadium with the Steelers on in the latest Batman movie, The Dark Knight Rises.

For the film Black Sunday, players such as Terry Bradshaw and Roger Staubach participated, as well as memorable player and announcer, Pat Summerall.  The movie is shot with great acting, excellent cinematography, and a very interesting story indeed.  It is extremely long however, again, coming in at 2 hours and 23 minutes.  Not to give much away, but before the 'big event' if you will, the players are shown getting off bush #4403.  What I find curious is the number 44, and 4+4+0+3 = 11.  Coincidence?

If you have Netflix, the movie is a stream away.  If you're into political, action, with some parts of dialogue movies, you very well might enjoy this title.  You also might learn about a part of history you never knew about, just as I did.  Before the film, I never knew about Israel's international campaign against Black September.  The movie gets into some heavy dialogue between the men who complete these assassination missions, and how they really feel about themselves.  I won't spoil it anymore.

A point of interest; the movie was released on March 11, a date in history tied to many things, including our entrance into World War II, and the World Trade Center buildings coming into being.  It is the number 322 backwards in length, joining other movies such as:  007:  Skyfall, Superman:  Man of Steel, The Avengers; all which run 2 hours 23 minutes, a long length for any film.  322 is also hidden in films in other ways, such as imagery, as mentioned in other blog posts, which you can see here.  And if you think it is silly to compare movies with reality, I'll remind you that the two biggest movies of my lifetime, and just before the events of September 11, were The Matrix and Fight Club.  Let us recall both movies.  In a way, they are both about the same thing; how if you choose to live within the system, you're really just wasting yourself.  Instead of living within the system and going along, you must fight back!  Right?

Now check this out.  In The Matrix, Neo's passport expires on September 11, 2001.  In Fight Club, after the agenda of destroying the world's credit/banking system is achieved, you see a skyline of buildings falling at free-fall speed, while the Pixie's song Where Is My Mind? is playing in the background.  Not long after, the World Trade Centers would fall to the ground, at free fall speed, just like in the movie... and we would find out where our minds were, or weren't.

To close this mind-bender of a post, the Super Bowl will come exactly six months after Senator Lindsay Graham warned a nuclear bomb could detonate in Charleston or New York harbor, within six months.  Lindsay Graham has been the Senator of South Carolina since 2002, a Zionist supporter who has been in office for the entire post-911 era.  This Super Bowl will be the 44th Super Bowl in the modern era of the NFL, which began in 1970, 7 years before the release of this film.
Posted by Zachary K. Hubbard at 9:12 AM