Why isn't Fukushima getting more attention? 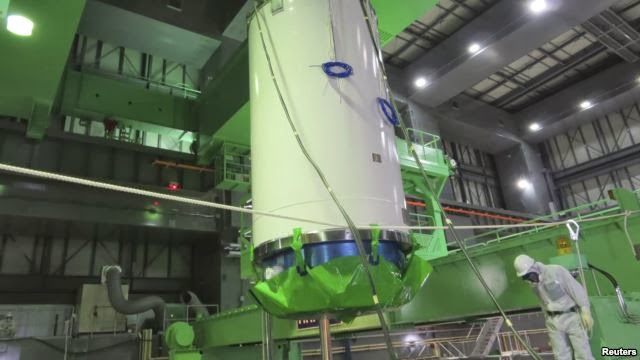 The nuclear disaster at Fukushima is the most threatening thing on the planet at this moment in time to the future of humanity.  It literally threatens all of us.  Yet, it is kept out of the mainstream consciousness for the most part, by our global media.  Why is that?

From an article written earlier in September of 2013:
"Chernobyl’s first 1986 fallout reached California within ten days. Fukushima’s in 2011 arrived in less than a week. A new fuel fire at Unit 4 would pour out a continuous stream of lethal radioactive poisons for centuries.
Former Ambassador Mitsuhei Murata says full-scale releases from Fukushima “would destroy the world environment and our civilization. This is not rocket science, nor does it connect to the pugilistic debate over nuclear power plants. This is an issue of human survival.”
Neither Tokyo Electric nor the government of Japan can go this alone. There is no excuse for deploying anything less than a coordinated team of the planet’s best scientists and engineers.
We have two months or less to act.
For now, we are petitioning the United Nations and President Obama to mobilize the global scientific and engineering community to take charge at Fukushima and the job of moving these fuel rods to safety.
If you have a better idea, please follow it. But do something and do it now.
The clock is ticking. The hand of global nuclear disaster is painfully close to midnight."

For the rest of that article, please read here.

After reading it, please ask yourself, why hasn't this become a more pressing matter for our nation, or the world's leading nations?  Why wouldn't we deploy our best and brightest scientists to diffuse the problem at the reactor?  Why is Japan being left to handle the problem without the aid of others?  Recall the date this all started, 3/11/11.  Suspicious.

Related story from this week:  Life 1000 days after the Fukushima incident
Posted by Zachary K. Hubbard at 11:21 AM