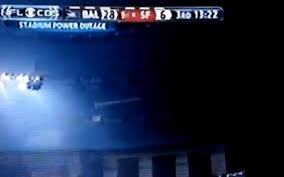 Do you recall the blackout of Super Bowl 47?  If not, it was an Illuminati spectacle for literally all to see.  Let us start with the numerology of 47.

4+7 = 11 = The numerological representation of Satan and the destruction of man.

Next, let us look at what time the blackout occurred.  It occurred in the third quarter, with 13:22 left on the clock.  Do you see the number 322 hidden within?  If you think that is a coincidence, you probably also think it is a coincidence that the blackout lasted for 33 minutes, as reported by USA Today.  If you've never read the blog post, 33 rules your life, please do so here.

This year, Super Bowl 48, will be the 44th Super Bowl of the modern NFL era, which began in 1970 when the American Football League and National Football League merged.  It will also be the first cold weather Super Bowl, and the first Super Bowl to be hosted by two states, New Jersey and New York, the third and eleventh states respectively.

In an earlier post, I wrote about the movie Black Sunday, which was released on a 3/11, and ran 2 hours and 23 minutes in length, or the number 322 backwards.  It is about a Super Bowl terrorism event taking place in the year 1977.  You can read that post here, and reflect on how it might relate to a real life future Super Bowl event.

Last, let us keep in mind that Senator Lindsay Graham said a nuclear bomb could explode in Charleston or New York harbor within the next six months, on September 2, 2013, exactly 5 months to the day of February 2, 2014, when Super Bowl 48, or 44, depending on how you look at it, will be played.  February 2 is the 33rd day of the year.
Posted by Zachary K. Hubbard at 2:34 PM