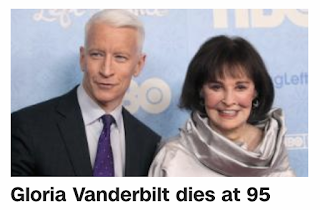 Gloria has died on a date with 62 numerology.

Going back in time, it appears his father died for Anderson's future.

Notice it was 7-months and 2-days as well.

His father also died 126-days after his own birthday.

Notice the 4 months and 4 days as well.

He was the fourth husband of Vanderbilt...

For one last though, could Cooper's career as a major propagandist and news anchor have been planned from the time of his father's death on January 5, or 5/1, like 51?