Notice the gematria of Operation Boot and TPAJAX Project.

Can you say Scottish Rite?

The man installed as a result of the coup was Mohammad Reza Pahlavi, summing to 187. 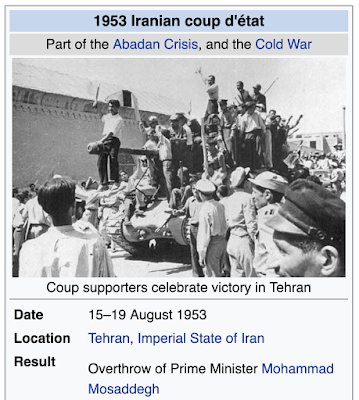 The Iranian coup d'état began on the most perfect date.

The target was Mohammad 'Mosaddegh'.

The US also called it Operation Ajax.

The coup also began in the perfect year, '53.

It had A LOT to do with British Petroleum.

Keep in mind that it ended on the 19th of the month.

The overthrow was complete on a date with 99 numerology.

Don't forget the US was named as such on September 9, or 9/9, and the Bavarian Illuminati was established on a date with 99 numerology.

Notice Mohammad Mosaddegh was born June 16, or 16/6,  That ties in with Iranian coup d'état gematria, summing to 166.

When he was removed, it was his 65th day of his age.

Again, the action was the work of the United Kingdom and United States.

Keep in mind all of this began after Iran nationalized the assets of BP (British Petroleum) in March of 1951, more than two years before the coup.