There is a reason we've been lied to about 6,000,000 murdered Jews during World War II.  It is a political lie that dates back to well before World War II, and is first documented in the Sun Newspaper of June 15, 1915, more than two decades before World War II even began.  Between June 6, 1915 and before the start of the second world war, the lie was posted at least ten times in international newspapers.  Before looking at that evidence of the 6,000,000 murdered Jews lie, let us understand the purpose of why this lie was told and is still told, via school classrooms, mainstream media, books, movies and politicians.

The purpose of the lie was twofold:  1)  To establish the Zionist State of Israel, that goes against the Jewish faith and Jewish Holy Book, the Torah  2)  To help cast guilt away from the unnecessary atomic bombing of Hiroshima and Nagasaki, and the most deadly bombing of the entire war that was equally unnecessary, the fire bombing of Dresden, the war refugee city in Germany, which it is estimated that 300,000 or more people were killed at once.  These three incidents were the most deadly incidents in the entire war, and likely amassed more casualties than the number of Jews who perished during the entire duration of the war.

In uncovering this terrible lie, we will look at crucial evidence that proves 6,000,000 Jews were not killed, but more likely a few hundred thousand, and at most, 1,000,000.  Further, these deaths were caused by starvation and disease, which was common for people in concentration camps; whether they be Africans in British concentration camps of South Africa during the war, or Japanese within United States concentration camps.

The proof we will use to dispel the lie of 6,000,000 dead Jews are the newspapers predating World War II by more than two decades, all claiming that 6,000,000 Jews have been killed, or are about to die, unless the world intervenes.  We will also look at the plaque in Auschwitz, which in 1991 was removed, stating that 4,000,000 Jews had been killed there.  Even more damaging, we will examine the World Almanac Population of Jews from before World War II, and after World War II, which surprisingly shows that the Jewish population grew- impossible if 6,000,000 Jews truly perished.  Last, we will look at testimony from Dr. Franciszek Piper, head of the Auschwitz museum, who exposed the truth; there were no gassing or burning chambers at the concentration camps, and no Jews were ever gassed or burned alive.  These lies were never backed with any physical evidence, only false testimony at the Nuremberg Trials, where Nazis were also accused of "skull shrinking" and making furniture from "Jew skin".  Both of these allegations were proven completely false not long after the trials.

World War I Newspapers & Beyond
The following papers all used the figure of 6,000,000 dead, dying or starving Jews, in need of the world's help.  Notice that all of these article predate World War II by a considerable amount of time.  If any of the articles were true, surely the world's Jewish population would have been extinct before even World War II began, because the world's Jewish population was approximately 15 million in the year 1915, when the first claim of 6,000,000 dying Jews was published by The Sun.
A historian has posted a YouTube video of these ten newspapers, where you can see the actual papers with your own eyes, and read the articles and claims that are within them.  That video is as follows.


After reading these articles, it begs the question, why the number 6,000,000?  It is argued by some historians that the Talmud, the Jewish holy book that is only written in Hebrew, states the Jews cannot reclaim Israel unless there is 6,000,000 less of them.  Because I cannot read Hebrew, I cannot verify this to be true, but it does seem like a believable claim, especially when you consider the fact that ancient Jews, who wrote the Bible, Torah and Talmud, all practiced Gematria, the science of hiding numbers within words, names and phrases, that all have important meanings to their faith and spiritual beliefs.  In an earlier blog post, I shared this revelation about Mary, Jesus and how it fit into this practice of Gematria.  The point is, numbers are very important to the Jewish faith, and that is why the lie of 6,000,000 was likely used over and over throughout history.

Auschwitz Plaque Removed in 1991
In 1991, a plaque at Auschwitz reading "4 million people suffered and died here" was removed and replaced with a plaque reading "the Nazis murdered about one and a half million men, women and children, mainly Jews from various countries of Europe."  This is important, because in the Nuremberg Trials, the Nazis were accused of gassing and murdering 4.1 millions Jews at Auschwitz.  What the changing of plaques proves, is that for a long time a highly exaggerated number was claimed to be truth, only to later be reduced by more than half.  In turn, it shows that no numerical figure or accusation should be trusted, especially when the exaggeration adds 2.5 million people, a very large sum.

World Almanac Jewish Population
The World Almanac from 1933, the year Judea declared war through boycotts and economic sanctions, shows the Jewish population of the world at 15,315,359.  The World Almanac from 1948, three years after the conclusion of the war, shows the Jewish population of the world at 15,753,658.  Had 6,000,000 Jews truly been murdered, it would not be possible for their population to have maintained such stability.  Further, by many historians account, there were only 300,000 Jews remaining in Germany when the war broke out, and only 3,000,000 Jews in all of the territories the war took place in.  In other words, it would have been impossible for 6,000,000 Jews to have been murdered during the course of World War II. 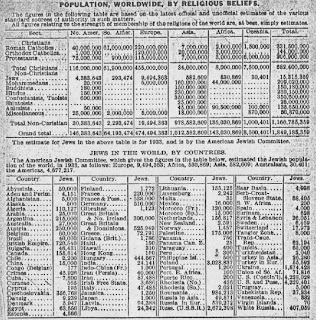 Dr. Franciszek Piper Testimony
In 1992, Dr. Franciszek Piper, Director of Archives at the Auschwitz Museum, went on the record confirming that no homicidal gassings had ever taken place at the concentration camp, confirming the Leuchter Report, which was released four years earlier, in 1988.  Fred Leuchter went through the trouble of collecting samples of the masonry at Krema 1, where Nazis were accused of gassing over 4 million Jews, and testing for chemical residue that should have been present if the allegations were true.  His research and findings proved that the chemical residue which should have been present, was not.  Fred Leuchter was quickly dismissed, and even threatened with criminal charges, but those were later dropped.  While this evidence might seem inconclusive by its lonesome, when paired with the newspapers dating back to World War I, the World's Almanac Jewish Population of before and after the war, and the removal of the plaque at Auschwitz, the truth becomes more clear.

Evidence Beyond World War II
Since World War II, Israel and the Zionists have been a part of other crimes and cover ups.  Very quickly, let us examine two:  1)  On June 8, 1967, during the 6 Days War, Israel attacked the USS Liberty, killing 34 U.S. Navy men, and wounding 171 more.  The purpose of the attack was to destroy the USS Liberty, and blame the attack on Arab Nations, in turn, drawing the United States into the war Israel had launched.  Because the ship was not fully sunk, and survivors of the attack were able to bare witness to the truth, Israel was held accountable for their actions, but the story was hidden and buried, never to be reported in the mainstream press.

Years later, on September 11, 2001, five Israelis would be arrested in New Jersey while dancing and filming the attacks on the World Trade Center buildings.  They were deported to Israel, where they later went on Israeli television, and confessed that they were in the United States to "document the attacks".  Ask yourself, how did these Israelis know about the attacks in advance, if the United States very own government was unaware and unable to prevent what occurred on that day?

The very next day, September 12, 2001, Ehud Barak, the Defense Minister of Israel, went on public television in London and said the United States should declare a War on Terrorism, which is exactly what we did, and what we have been doing for going on thirteen years.