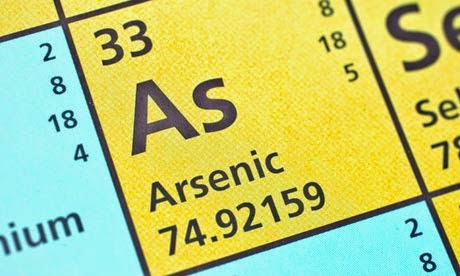 Arsenic is the 33rd element on the Periodic Table.  It also has a name numerology of 33.
Arsenic is used to strengthen metals such as copper and alloys.  It is used in treating wood products, making chemical fertilizers as well as pesticides, herbicides and insecticides.  It is also used in making batteries.  Historically, it has a much more sinister purpose; poisoning people.

With regards to poisoning people, sometimes it is intentional and other times it is a consequence of living in a polluted world.  In the present, arsenic is notorious for poisoning worldwide water supplies, and can be traced in all water across the globe.  In Bangladesh, contamination is extremely high.

In one of history's mysteries, is the death of Brigham Young, the former leader of the Mormon Church, who rose to power after the death of Joseph Smith.  Brigham Young was the leader of the morning church from the years 1844 until 1877, a span of 33 years, when he died unexpectedly on August 29, 1877.  Some historians suspect that the cause of his death was intentional poisoning by means of Arsenic.

In the Middle Ages, Pope Alexander VI was believed to be responsible for the poisoning of several Cardinals and Bishops with arsenic laced wine, so that after their death, their properties and wealth could be reclaimed.

On a side note, the newest elements to the Periodic Table are Elements 114 and 116, which were discovered in Moscow in 2000.  You can read about them here.
Posted by Zachary K. Hubbard at 8:33 PM