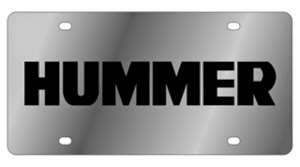 Today I was driving home from work, doing my part to destroy the planet with the burning of fossil fuel and corn for the purpose of getting from Point A to Point B as quickly as possible.  While lurking with traffic, in a short period of time, I saw a Hummer, a Range Rover and a Toyota Sequoia.  To my surprise, the numerology of all three vehicles had '33'.
Could it all be coincidence?  I don't think so.  I think this is the stamp.  They've got us living foolishly, blowing money on gasoline, driving unnecessarily big cars and having unnecessarily big families.  We do it because we were told it is okay- I get it.  That is why we need to start questioning and thinking more however, because we've been told a lot of things that are wrong, deliberately, to manipulate us, to take advantage of us and abuse us...

In the coming days I will continue to dissect the numerology of other large gas guzzling vehicles.  When I think of gas guzzlers, I think of Hummer most of all, especially because of the fact that they became popular in consumer culture after the start of the second Iraq War on March 20, 2003.  To think, we were involved in a war that has much to do with oil and banking, and back in the "Homeland" people were beginning to buy SUVs that used 8/mpg or worse...  why?

Making matters even worse, at that point in history there was a tax credit of $50,000 if you bought a Hummer.  Think of it, for buying a polluting vehicle that will help destroy the planet, you get a $50,000 tax credit.  Why does some rich asshole need that while tens of millions of minimum wage working Americans have to pay much of their income away in taxes, when they already make $18,000 or less a year.

The game is rigged.  Our destruction has been plotted and is being achieved, by our will.  Why?  Because we have given in to the wrong temptations, by and large, and we're passive to help stop what we know is wrong, from this to that.
Posted by Zachary K. Hubbard at 11:44 PM