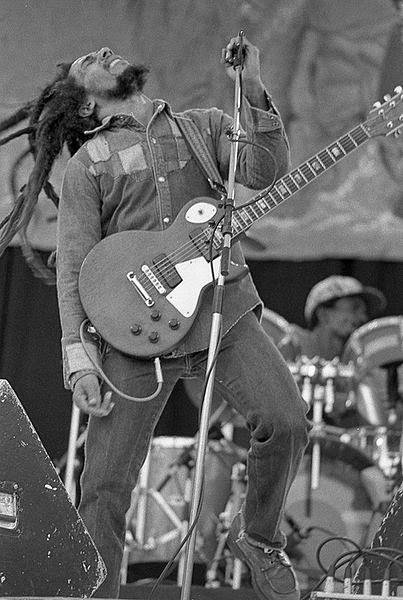 Robert Nesta Marley, better known as Bob Marley, is one of the world's most famous singers, especially of Reggae music.  He is known for his thoughtful, Bible inspired lyrics, harmonious voice, and marijuana smoking.  Let us quickly examine the interesting numerology of the name Robert Nesta Marley by using the Pythagorean Method.
Let us also decode the name with the standard method to see how Marley = Jesus.
Bob Marley and the Wailers would begin recording music in 1963 under the direction of Scratch Lee Perry.  In 1974, the group would disband after eleven years together and Bob Marley would launch his solo career.  Let us quickly look at the numerology of the name "Bob Marley" and see what is coincidental about the year 1974.
In the year 1977, at the age of 33, Marley would release the album Exodus, which was recorded in the U.K., catapulting him to worldwide fame.  If George Washington were alive, I know he would be a major fan of the album Exodus; same with Queen Elizabeth.
Marley's last album released was in 1980, Uprising.  It was his most spiritual album, with heavy Christian themes, including the classic "Redemption Song".  Bob Marley would sing his last live concert in Pittsburgh, Pennsylvania, "the Keystone State", on September 23, 1980.
Bob Marley would pass in Miami, Florida on May 11, 1980.  Ten days later, Edward Seaga, Prime Minister of Jamaica, would say these words about the deceased Bob Marley;  "His voice was an omnipresent cry in our electronic world. His sharp features, majestic looks, and prancing style a vivid etching on the landscape of our minds. Bob Marley was never seen. He was an experience which left an indelible imprint with each encounter. Such a man cannot be erased from the mind. He is part of the collective consciousness of the nation."

It is said that Bob Marley's last words were spoken to his son, and he told him; "Money can't buy life."  Sadly, I think Bob Marley might have found this out the hard way.  Something tells me his split with the Wailers and successful solo career which began with U.K. recording sessions was inspired by these people that we refer to as the Illuminati.  Maybe Bob sold his soul, or did it without knowing, and his soon after death was a consequence of dealing with these sick people.  I think the same is likely true of musicians from Tupac Shakur to John Lennon.  For more information on those subjects, please refer to this blog.

"The people, who are trying to make this world worse... are not taking a day off. How can I? Light up the darkness." - Bob Marley
Posted by Zachary K. Hubbard at 8:49 AM