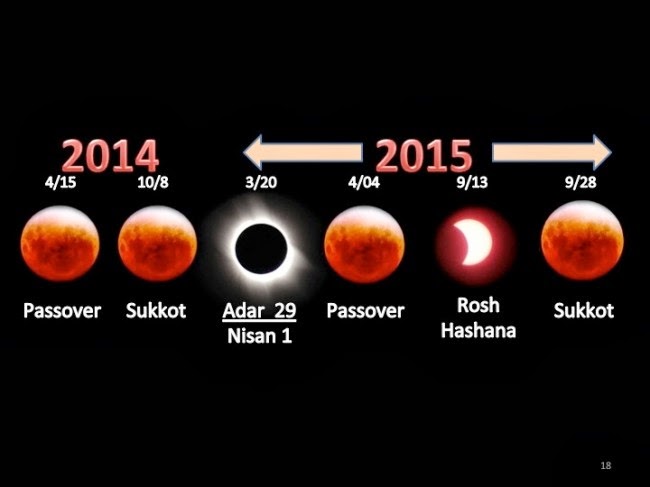 Since I started this blog in October of 2013, I've shared much information about the upcoming 'Four Blood Moons' that will take place in 2014 and 2015, as well as the solar eclipse that falls on Nisan 1 between the two lunar eclipses.  The most informative of these posts can be read here.  If you take the time to read that post, you'll notice how it compares with MSN's mainstream reporting of the upcoming lunar eclipses.

You can read the MSN article on this subject here.  You'll notice that within the article, there is no mention of the lunar eclipses falling on the first days of Passover and the first days of the Feasts of Tabernacle.  There is also no mention of the solar eclipse on Nisan 1.  What there is discussion of is "false conspiracy theories" that are based in nothing and you the reader of this MSN have nothing to worry about.
BZZZZZZZZZZZZZZ!!!

This is misleading reporting, essentially telling you to go back to sleep and stop paying attention.  In the last half a century there have been two major events that occurred within days of a lunar eclipse landing on the first day of Passover, and those events were both awful tragedies.  One was the assassination of Dr. Martin Luther King. and the other was the meltdown at Chernobyl, which became the worst nuclear disaster ever when a planned drill went terribly wrong.

On the flip-side, CNN has released a more recent article on the upcoming four blood moons and used the word "prophecy" to describe them.  They also discuss the April 15 lunar eclipse landing on the first day of Passover, but do not inform about the other three moons or the solar eclipse on Nisan 1.  Take this opening quote from CNN's article on the subject for example.


Prophecy loves signs from the heavens, and they will come Tuesday with a 'moonlight spectacle'.

Please recall CNN is the network where founder Ted Turner said that CNN would be live on air to broadcast the end of the world.  This was the day CNN launched, June 1, 1980.  With that knowledge in mind, something catches my eye about the word 'moonlight' in 'moonlight spectacle'.
From the world of religious texts most of us are familiar with, "four blood red moons" are spoken of in the first book of the Bible, Genesis.  The numbers 311, 113, 33 and 333 have much in common in numerology.  Genesis, happens to have 33 numerology.
For our own sake, let's hope we don't get any 311 spectacles, or 113 spectacles.  In the past, that has meant entrances into World Wars, 9/11 tragedies, and more.  What you should do however, is read the first post linked at the top of this article, and mark the days mentioned in that post on your calendar; for 2014 and 2015.  My gut tells me one of them is sure to be a spectacle, especially April 4, 2015...
Posted by Zachary K. Hubbard at 3:22 PM