After reading this, I'm leaning more towards a Panthers Super Bowl victory than a Broncos.

When the American Football League and the National Football League merged, the (AFL) became the AFC and the (NFL) became the NFC.  This year the Carolina Panthers represent the NFC, and they are lead by the former linebacker of the '85 Bears, who defeated the Patriots 46-10 in the Super Bowl at the end of the season.  They won that year with the revolutionary 4-6 Defense, created in 'Chicago'.  Chicago is home of the league's first two professional football teams, thus why the historical significance.

With regards to '83', Peyton Manning is born on the 83rd day of the year, and this year his birthday comes 46-days after the Super Bowl, the span from February 7, to March 24.  In Manning's career, he has won only one Super Bowl, over the Chicago Bears, 29-17, a sum of 46 points, by no coincidence.  This year might be the year he closes out his career, giving the love back to Chicago, and finishing a loser, like his father.

Don't quote me on that, there are signs that favor the Broncos as well, but with so many things favoring Chicago, and the Panthers having the historical Chicago connections, it is hard for me to see them losing.  Ron Rivera's '85 Bears blew out the Patriots in the Super Bowl, after finishing 15-1 on the season, just as his 2015 Carolina Panthers finished.

One last point, after the 49ers won the Super Bowl in '85 and the Bears won it in '86, at the end of the '85 season, the NFC went on to win a consecutive 13 Super Bowls, a record streak for the two conferences. 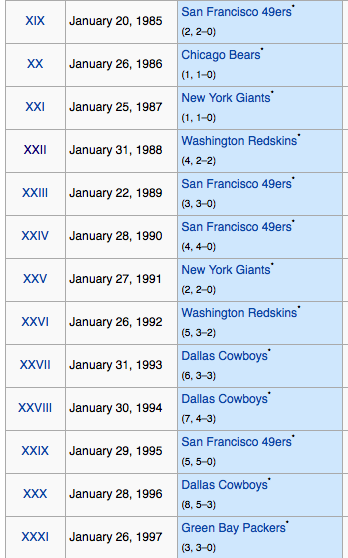 Here is my take on "why 13 in a row" in the rigged world of NFL by the numbers.

It should be noted it was the Denver Broncos who broke that streak, winning Super Bowls 32 and 33.

The Broncos also have team name gematria of '41'.