The angry "flat earth community", on display, again- are they liars, paid shills or just delusional? 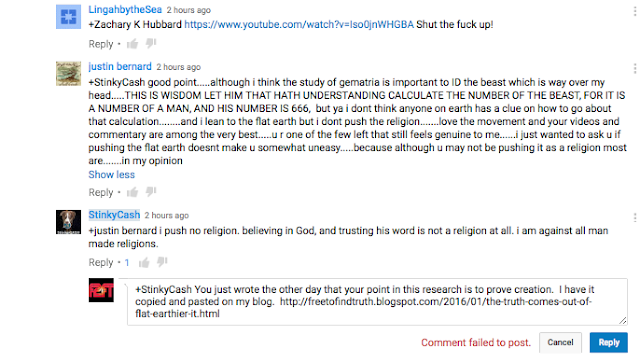 Anyhow, read what he wrote above, then look- Just the other day StinkyCash wrote that his point in this "flat earth" work is to 'prove creation'.  Now today he says he pushes no religion?  Read what he wrote here:  http://freetofindtruth.blogspot.com/2016/01/the-truth-comes-out-of-flat-earthier-it.html

Also, read what he wrote above.  More religious psycho babble, and like a child, he has to attack my work, which is a lot more solid and proven than anything coming out of the flat earth camp, with all the flat rather contributors combined.  Keep in mind, this Stinky character also KNOWS pro sports aren't rigged, or at least that is what he said a year ago, before starting to admit that maybe they are... an omission he made after my World Series decoding.
Posted by Zachary K. Hubbard at 8:11 PM