63 74 | Man arrested outside of Disneyland Paris with two firearms and ammunition, (November 13 and September 11 connections) 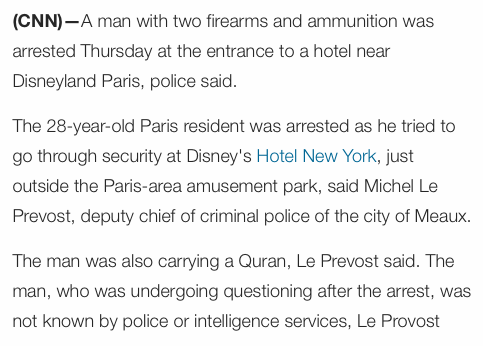 Of course the events of September 11 greatly impacted New York City.  Recall, from September 11 to November 13 is a span of 63-days.

This latest story, the man arrested outside of Disneyland, comes 74-days after the November 13 "attacks".  Remember, 74 is a very important number to the Masons and Zionists who put on these stunts by the numbers.

New York city is on the 74th Meridian, for the record.

Also, as I said after the November 13 attacks, this was all part of the war drum beating for World War  III.

And as I've said for more than a year, don't kid yourself, the next 9/11 might involve Disneyland, because after all, what would infuriate the american sheeple more than an attack on the nation's most evil playground?