Do you recall Black Rob's song from the year 2000 titled Whoa?  I do, only because it was one of those songs where at one point in time it seemed every big wheeled vehicle with a system was systematically riding down the street playing the thing.  If you've never heard the song, it opens with Black Rob, born Robert Ross, not to be confused with Rick Ross, saying the following:


I'm getting ready to put y'all up on something, man
Yo, when you see something ill, know what I mean?
That shit is whoa, anything ill you see is whoa

Before I decode the words "Whoa" and "Ill", I want you to know that in decoding the English language into numbers, I have dissevered that "33, 47 and 74" often come paired together.  I have given them the nickname "The Trinity".  In this case, Black Rob, born Robert Ross, prior to becoming a Hip-Hop artist, is showing how it is done with song lyrics.

Let us recall this is "Hip-Hop"
And let us recall that that the artist was born "Robert", a very common name in the entertainment industry.
Would you believe how long the song "Whoa" runs?  If you guessed 4 minutes and 7 seconds, pat yourself on the back. 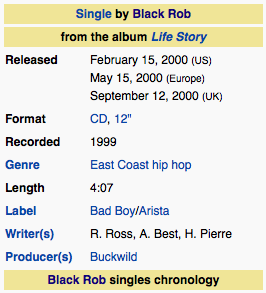 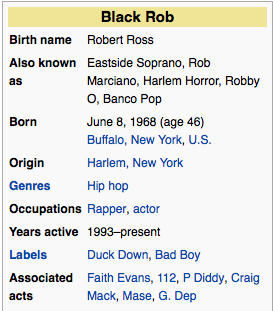 Notice that Black Rob's music career began in '93, the number of Thelema; the elite and occult religion.  The number 93 is also much like the Gematria of "Hop" in "Hip-Hop", where hop equals 39, the inverse of 93.

Talking Hip-Hop makes me think of other songs from history that were much like Black Rob's Whoa.  From memory, the next song that got played the way "Whoa" did, was 50 Cent's "In the Club", at least where I was at the time, in Arizona.  The name "50 Cent' also has Gematria of 47.
Like Black Rob said, everything is whoa...

If you want to read about 50 Cent, the Gematria surround him is also very interesting, especially the release dates of his albums.  Please learn about that here.