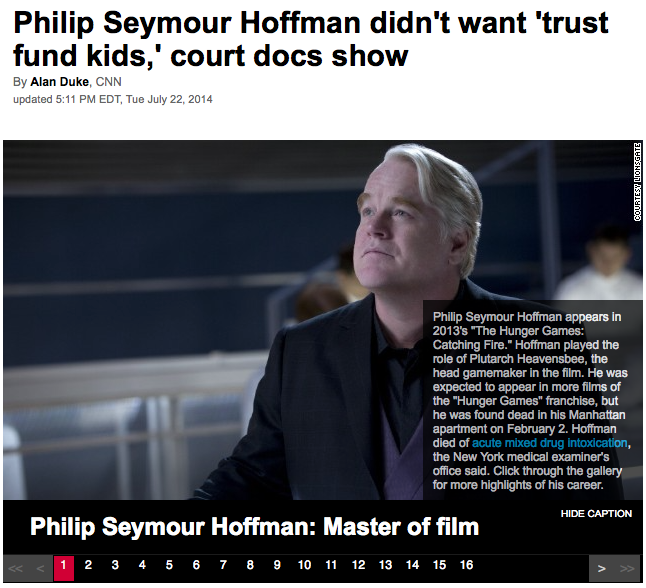 Recall that Philip Seymour Hoffman was murdered on February 2, 2014, the 33rd day of the year.  In the reporting on his death, it was said he was found on the fourth floor with 44-bags of heroin.  Now, the mainstream media is reporting he has left all of his money to his girlfriend, saying he did not want for his children to become 'trust fund babies'.
I think this is how they do people dirty.  We're seeing it.  Philip Seymour Hoffman, first murdered, then made to look like a pompous ass, giving all of his money to his girlfriend and leaving none for his children.  I seriously doubt it, I think this is a major manipulation and dishonesty of the highest kind.  I feel so bad for Mr. Hoffman.  It is funny to think he was my favorite actor- on a day when I expected the Super Bowl might blow, or have some "unexpected" show, was murdered and in turn a great acting talent and person was lost.

I know Philip Seymour Hoffman was a decent person because of the documentary film he put out after the 2000 election in an effort to expose how dumb we are as a populace when it comes to things that matter.  Like myself, Philip Seymour Hoffman recognized that the population of the United States is not paying attention to what it needs to, and as a consequence, is acting a fool!

Notice that Alan Duke is the author of this trash piece.