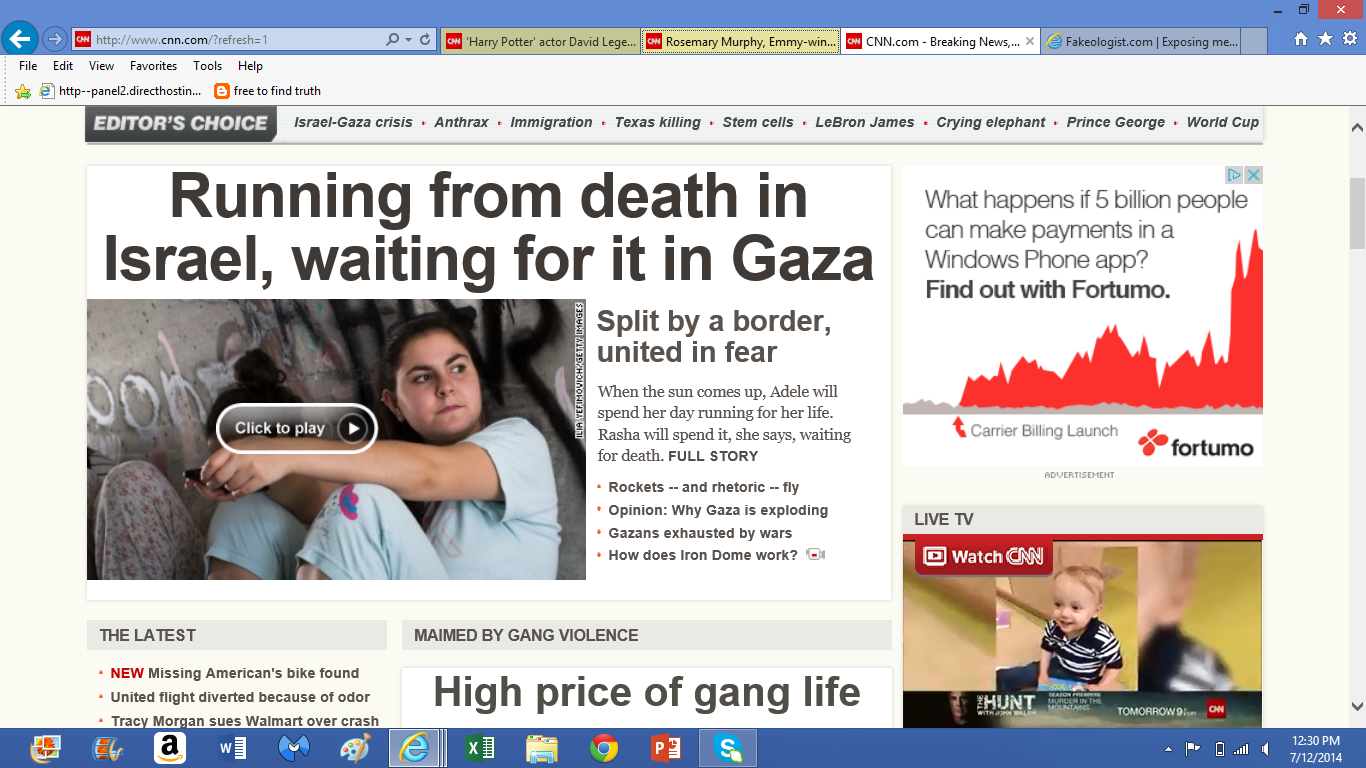 CNN is telling the story of Adele Ramer, a young girl, who is living in constant fear with the surrounding reality of rockets firing, landing and exploding in the space around her.  The rocket fire began on July 7, 2014, or 7/7/7 in numerology; the 9-year anniversary of the London 7/7 Bombings.  The rocket fire from Israel that started the conflict is said to be in response to the three dead Israeli teens that were found in the day before.  If you have not read about that hoax of a story, please do so here.  In the case of Adele Raemer, the "33" hoax continues.
You can read the story of Adele Raemer here, courtesy of CNN.  The story also talks about "Rasha", a Palestinian girl who lives in the same fear of the rockets.
Isn't it amazing?  The story of the two girls living in fear, are the names coded into the numbers that are found in the daily, ongoing hoaxes?  How can it be?  How can it be so often?  Why always these familiar numbers?  What does it all mean?  Are rockets even firing in Gaza and Israel?  Is "Hamas" really bad?  In this world of static and misinformation, it is hard to know what is what, or what is real.
Hamas has the "meaning of life number" and a coded 113 and 119 within its lettering.  In history, the dates March 11 and September 11.  Hamas was established by "Sheikh" Ahmed Yassin, who was killed on March 22, 2004, exactly one year after Operation Shock and Awe began against Baghdad Iraq.
Per Wikipedia, let's examine how Ahmed Yassin was murdered by Israel.


Ahmed Yassin was killed in an Israeli attack on 22 March 2004. While he was being wheeled out of an early morning prayer session in Gaza city,[36] an Israeli AH-64 Apache helicopter gunship fired Hellfire missiles at Yassin and both of his bodyguards. Before the attack, Israeli F-16 jets flew overhead to obscure the noise of the approaching helicopters.[36] Yassin always used the same direction every morning to go to the same mosque in the Sabra district that is 100m from his home.[36]

Yassin and his bodyguards were killed instantly, along with nine bystanders.[16][37] Another 12 people were injured in the operation, including two of Yassin's sons. Abdel Aziz al-Rantissi, Yassin's Deputy, became the Hamas Leader after his assassination.[36]