Rasheed Wallace, born September 17, 1974 and Rashard Lewis, born August 8, 1979, are both forwards in the NBA, who like to shoot the "3" ball.  If you watch the two men play, you might very well notice how similar their shooting form is.  They're shots are so similar in fact, it makes me wonder if they both had the same shooting coach at the "33" school of basketball.  What's the "33" school of basketball?  In short, it is where the elites raise talented athletes for their future roles in their money making basketball and other sport ventures.  I once would have thought such an assertion was crazy, but now that I know Gematria, and see that something sinister with regards to "33" is going on in the NBA as well as many other places, it has me thinking deeper.
Rasheed Wallace was born in the year '74, another number these elites like and a number that directly corresponds with 33; from the Bible to the United States.  As for Rashard Lewis, he has the 8/8 birthday, and the number "88" is of much importance to these people.  It too is found in names ranging form "George Washington" to "Uncle Sam".
Rasheed Wallace played for the University of North Carolina, the school that seems to "bring up" the most "33" players.  Rashard Lewis went directly from high school to the NBA.  Had he gone to college, you can bet North Carolina might very well have been his destination.  Both Rasheed and Rashard Lewis have won NBA Finals- Rasheed Wallace with the Destroit Pistons, and Rashard Lewis with the Miami Heat.

It should be noted that Rasheed Wallace went high in the NBA draft, and Rashard Lewis fell very low, to the second round, 32nd pick.  That year the Seattle Sonics had the 32nd and 33rd pick; they used the 33rd on Jelani McCoy.
In that same draft, 1998, Robert "Tractor" Traylor was one of the top picks.  His career in the NBA would be short and he would be found dead on May 11, 2011, or 5/11/11 in his home, at the age of 34.  The official cause of death was a "heart attack".  His wife demanded an investigation but no findings were ever released.  To me, that date is quite curious, and from researching this topic, it seems that quite a few people "in the 33", end up dead, especially early. 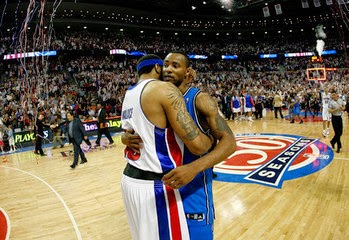