33 | Mithra and the Roots of Christianity 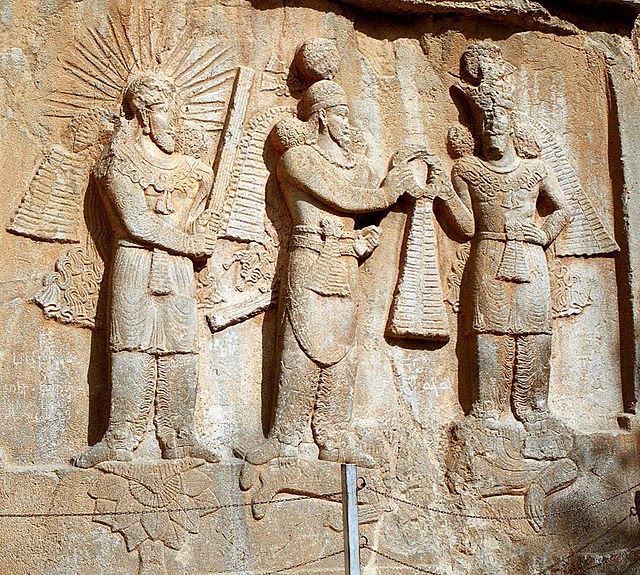 Mithra is also referred to as Mithras.  The picture above is courtesy of Wikipedia and captioned as follows:


"Taq-e Bostan, Iran. On the left stands the yazata Mithra with raised barsom"


Before we get into Mithra, I want you to think about the location and name 'Taq-e Bostan, Iran' and 'Boston, Massachusetts'.  In speech, they are similar, and in Gematria, much is the same.
As for the Bible, the holy book of the Christians, it is "33" from the beginning to the end.  Whoever wrote the Bible was certainly aware of the truth of "33".  Most readers of the Bible are aware that Jesus was crucified at the age of 33, but they're not aware of Gematria, or that the Gematria of Genesis is "33".
If you think that is a coincidence, Joshua is the English translation of Jesus.
Here are some more "33-74" combos.
Moving on, the Gematria of Mithra is much the same.
Mithra is credited to the Persian Empire; let us read about it from an excerpt courtesy of Wikipedia.


Mithra (Avestan: 𐬀𐬭𐬚𐬌𐬨 Miθra, Old Persian: 𐎷𐎰𐎼 Miça) is the Zoroastrian angelic divinity (yazata) of covenant and oath. In addition to being the divinity of contracts, Mithra is also a judicial figure, an all-seeing protector of Truth, and the guardian of cattle, the harvest and of The Waters.

The Romans attributed their Mithraic Mysteries (the mystery religion known as Mithraism) to Persian or Zoroastrian sources relating to Mithra. However, since the early 1970s, the dominant scholarship has noted dissimilarities, and those mysteries are now qualified as a distinct Roman product.[1]

The Khorda Avesta (Book of Common Prayer) also refer to Mithra in the Litany to the Sun, "Homage to Mithra of wide cattle pastures,"(Khwarshed Niyayesh 5),[3] "Whose word is true, who is of the assembly, Who has a thousand ears, the well-shaped one, Who has ten thousand eyes, the exalted one, Who has wide knowledge, the helpful one, Who sleeps not, the ever wakeful. We sacrifice to Mithra, The lord of all countries, Whom Ahura Mazda created the most glorious, Of the supernatural yazads. So may there come to us for aid, Both Mithra and Ahura, the two exalted ones,"(Khwarshed Niyayesh 6-7),[3] "I shall sacrifice to his mace, well aimed against the skulls of the Daevas,"(Khwarshed Niyayesh 15).[3] Some recent theories have claimed Mithra represents the sun itself, but the Khorda Avesta refers to the sun as a separate entity - as it does with the moon, with which the sun has "the best of friendships,"(Khwarshed Niyayesh 15)[3]