33 | Patrick Tillman and Robert Kalsu, the Last Two Pro Athletes to Die in War | Is there a link? 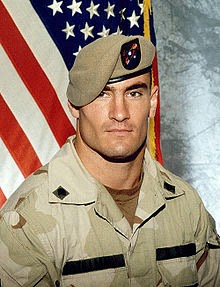 It is a rare event when a professional athlete leaves his playing career to join a war effort, but that is the story for professional athletes Patrick "Pat" Tillman and Robert "Bob" Kalsu, who also happen to be the last two professional athletes to die in war.  They also happen to be men with "33" names.
Pat Tillman was born November 6, 1976, Bob Kalsu was born April 13, 1945.  Pat Tillman would die at the age of 27 on April 13, 2002; a date with a numerology of 4/4/4 and Bob Kalsu would die on July 21, 1970; a date with a numerology of 27.
The number 4/4/4 are associated with assassination, and if you notice Bob Kalsu's birthday, it is April 13, or 4/4 in numerology.  Also notice that the date of death for Pat Tillman was the date of birth for Bob Katsu.  Also, there is the number "27", which is associated with the death of Rock and Roll Stars.  It should be noted that the number 27 can also be represented with "three nines" or "9-9-9".  In numerology, this number can be seen as a curse.
In the case of Pat Tillman, the media initially reported he was killed in combat.  Later, a story came out that he was killed by friendly fire.  Because of the discrepancy, hearings were held and it was disclosed that Pat Tillman was killed with point blank shots, to the back of his head, and soldiers were told to go on the record and lie about the events of the date.  What is known now, is that Pat Tillman was assassinated.  As for why, it is unclear.  Noam Chomsky, of MIT, and someone I have written about on this blog, says that he was working with Pat Tillman on a book regarding the poppy production in Afghanistan, and U.S. soldiers being used to guard these massive poppy operations.

When the news came out that Pat Tillman died, it was much like a "mini 9/11" in Arizona, where I happened to be living at the time.  Pat Tillman played for the local Arizona Cardinals and people were saddened by the news of his death- it was evident.

As for Bob Kalsu, his family kept quiet about the matter and did not want any media attention.  My guess is however, it was much the same as Pat Tillman, especially with the numbers aligning as they do.  Unfortunately there's very sick people in this world, and Pat Tillman and Bob Kalsu might very well have found that out the hardest way possible.  Pat Tillman died in "The War on Terrorism" and Bob Katsu died in "Vietnam"; both unnecessary wars, based on lies.  Think of all that have died for those lies, that number far exceeds Pat and Bob.