Here's a few more notes on the Jesuit Order / Society of Jesus.  Be sure to check out yesterday's work if you did not. 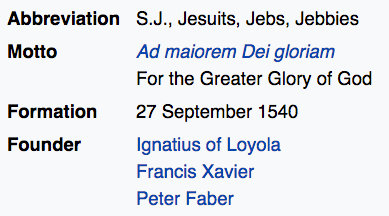 We'll start with the motto, 'For the Greater Glory of God'.

Remember, the Jesuit Order's birthday, September 27, leaves 95-days left in the year, and Google paid big tribute to this with their own September 27 birthday.

Remember Jeb vs the Donald, the Jesuit?  His brother the second Bush Presidency, was born on the 187th day of the year, July 6.  Society of Jesus = 187

If you missed the 54th episode of my radio show, it fell on the Jesuit Order's birthday.  What's funny, is if I hadn't missed two weeks in July, it would have been my 56th episode.

http://tfrlive.com/the-jesuit-order-weather-warfare-trump-v-nfl-hefner-74797/
Posted by Zachary K. Hubbard at 11:41 AM