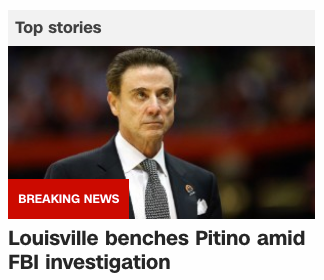 Today is September 27, the Jesuit Order's birthday.  As I continue to prove, the Jesuits run the world of sports, collegiate and professional.

Louisville are the "Cardinals", the Catholic terminology.

Pitino is the Catholic.  Here's some reporting from 2009.

Look at these names...

It's all a puppet show, meant to create the illusion that the NCAA "isnt' corrupt", and "corruption" is dealt with.  It is so easy to program the gullible goy.
Posted by Zachary K. Hubbard at 10:35 AM