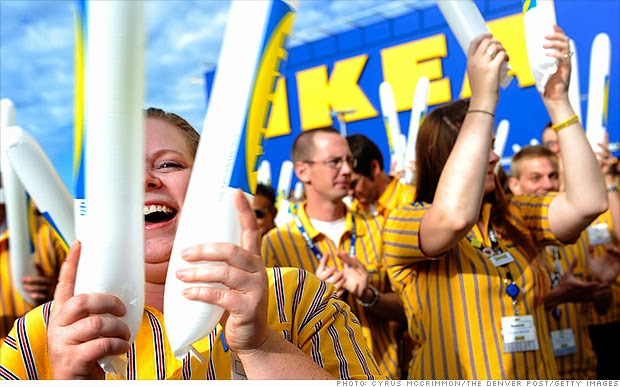 Don't get me wrong, I'm all for better wages, but when I realize corporations are hopping on board all of a sudden, it makes me think it has more to do with creating a standardized wage for our nation, that is depressed, and probably between $11 and $20 an hour for most working individuals for most professions, from IKEA clerks to lawyers.  Is that a good or bad thing?  Well, I tend to think anything these people want are bad, and these people own the mega corporations that rule this planet, such as IKEA.  The numerology of IKEA is quite revealing.
The legend about IKEA is that it was founded by its owner when he was just a 17-year old boy, in the year 1943, during the end of the second world war.  It should be noted that IKEA is a "Swedish" company.
CNN has specifics on how IKEA's pay raise will be implemented.  You can read about that here.  Germany is IKEA's highest grossing market, with 44 stars.  In the United States, there are approaching 40 stores.  Their largest store is in Stockholm, Sweeden.