At this present moment in time, through the year 2098, the Egyptian New Year is on September 11 of each year.  This is in accordance with the Coptic Calendar, also known as the Alexandrian Calendar.  Please recall that the 333-foot tall Masonic Lodge is located in Alexandria, Virginia.  Further, please recall that the Masons are obsessed with the religions of the world, astrology, numerology, mathematics, science, engineering and more.
Here is an excerpt from Wikipedia on the Coptic Calendar.

The Feast of Neyrouz marks the first day of the Coptic year. Ignorant of the Egyptian language for the most part, the Arabs confused the Egyptian new year's celebrations, which the Egyptians called the feast of Ni-Yarouou (the feast of the rivers), with the Persian feast of Nowruz.[1] The misnomer remains today, and the celebrations of the Egyptian new year on the first day of the month of Thout are known as the Neyrouz. Its celebration falls on the 1st day of the month of Thout, the first month of the Egyptian year, which for 1901 to 2098 usually coincides with 11 September, except before a Gregorian leap year when it is 12 September. Coptic years are counted from 284, the year Diocletian became Roman Emperor, whose reign was marked by tortures and mass executions of Christians, especially in Egypt. Hence, the Coptic year is identified by the abbreviation A.M. (for Anno Martyrum or "Year of the Martyrs"). Note that A.M. abbreviation is also used for unrelated calendar eras (such as the Byzantine and Jewish calendar epochs) which start at the putative creation of the world; it then stands for Anno Mundi.

This information gives much credence to the theory that these numbers originate from Egypt, possibly even further back.  Also, think of September 11, 2001 in hindsight.  On that day, it was the Egyptian New Year, or the New Century.  Also, the current President of Syria has a September 11, birthday.  When you think of it as New Years, it doesn't sound so bad.

The elite, they're living in a different world than us, literally and figuratively.  They truly do live under a different set of rules and philosophies.  What we live under, is what they have chosen for us to live under.  This is how we are controlled, and this is how they prosper.  If you're not familiar with the group, "Project for a New American Century", which was made up of members of George W. Bush's Presidential Cabinet (and now Obama's), it was about creating a "Pearl Harbor like event" to catapult a new agenda for the United State's foreign and domestic policy.  Well holy shit, on the Egyptian New Year, of the New Century, a "Pearl Harbor like event" happened.

Perhaps the purpose of the "Manhattan Project" was realized on September 11, when the World Trade Center towers were destroyed, likely by nuclear energy, in Manhattan.  If you have not read my post about underground nuclear weapon testing in Las Vegas, and how those dates coincided with the '93 WTC bombing, please do so here. 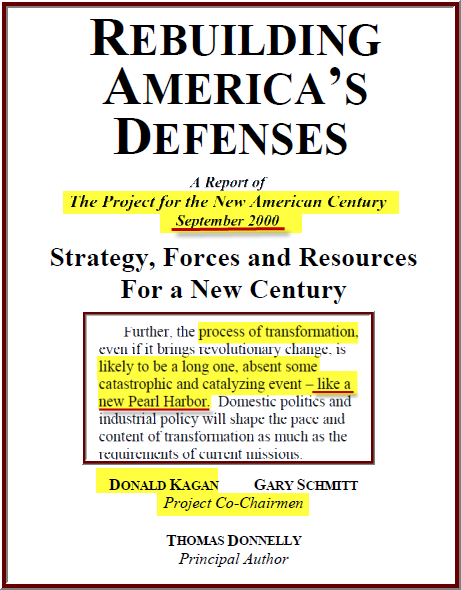