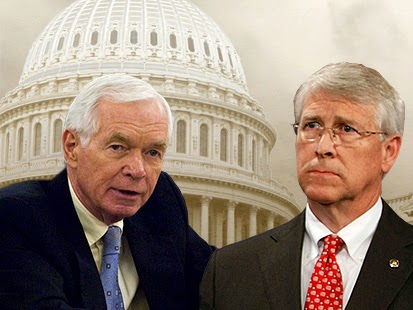 In New York, both the State Senators have "33" names.  So is the case in Mississippi.  To date, I've never decoded the Congress, or Senate, only the nation's Presidents.  Perhaps it is worth doing after coming to be aware these Gematria curiosities.  What are the odds of four out of four Senators representing two powerful states having "all 33 numerology"?  Mississippi's state senators are Thad Cochran and Roger Wicker.
In New York the senators are Kirsten Gillibrand and Charles Schumer.
Thad has been in office since December 27, 1978.  Roger Wicker has been in office since December 31, 2007.  Thad Cochran was born December 7, 1937, also known as "Pearl Harbor Day".  Roger Wicker was born July 5, 1951.  Thad's career in congress began in 1972, and Roger's began in 1988.

Today it is said that Cochran narrowly defeated his Tea Party challenger Chris McDaniel.  The following excerpt is from CNN's reporting on Cochran's primary win.


With 99% of the precincts counted, Cochran held a 51%-49% lead over state Sen. Chris McDaniel, who forced Cochran into the runoff after both candidates fell just short of the 50% threshold needed to avoid a longer contest. In the primary, McDaniel edged out Cochran by less than 1,500 votes.

It should be noted that Thad Cochran and Roger Wicker are known as "two of the biggest ear markers" of unwarranted corporate subsidies in the Senate.

Funny to think that the other politician in the headlines to night also has "33" name numerology.  Of course I am speaking about Larry Hogan, who narrowly won the Governorship primary in Maryland. What's my take on this?  Well, it seems to go back prior to the English language, which is quite telling when you think about it.