33 47 | The Bill and Melinda Gates Foundation 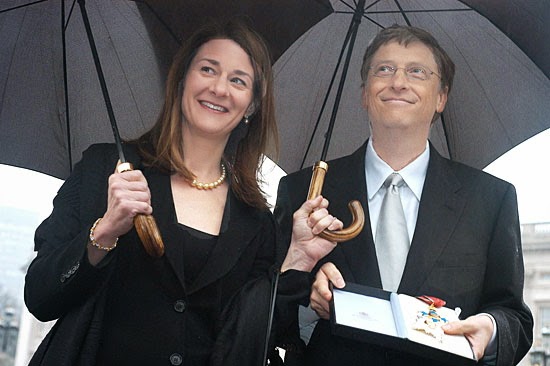 The Bill and Melinda Gates Foundation is believed by many to be doing good for the world, but really, they're just helping structure the path ahead, with bullshit research, meant to propel companies such as Monsanto and Microsoft into the future, the future they are creating for themselves.  Before we move further ahead, let us look at the numerology of the names "Bill Gates" and "Melinda Gates".
It is funny to think that just the other day a Microsoft employee was telling me that the reason so many words and names work out to 33 and 47, is because of the way the English language is structured with consonants and vowels.  Of course, this guy was talking out of his ass, as most people do, especially when confronted with the information I unleash regarding numerology and the English language, and quite frankly, I can't blame them, because seriously, who knew that all this time there was a cruel trick coded into us learning the alphabetic "order" at such a young age?
Since October, I've been writing about the strange "coincidences" that seem to be clues to who the "elite" truly are.  In my research, I've found several relevant numbers, but of those numbers, 33, 47 and 74 seem to all be tied at the hip.  This appears to come from the Bible and Roman Catholicism, and before that, Egypt.  Think of Jesus, crucified at the age of 33, on the cross.  Think of Christianity.
Further, think of these people, Bill and Melinda Gates.  Bill Gates is known for creating a terrible, blood thirsty company in Microsoft, that has dominated consumer computers since the inception of the market in this country; and Melinda Gates was formerly working in big pharmaceutical.  These days, instead of selling the drugs directly to the medicated masses, she creates research on why we should medicate the masses more, courtesy of her foundation.

In the ironies of my life, I moved to Seattle in December of 2006.  In the months after, the Bill and Melinda Gates foundation tore out the park that was near my apartment, to install their headquarters, where it is located today, on 5th Avenue and Mercer St., right across from the Seattle Center and Space Needle.  If the film "Red Dawn" is any clue, this might not be a permanent location.
The Bill and Melinda Gates foundation was launched in 2000.  Warren Buffet, another one of the world's richest men, is a key contributor to the foundation.  Let us close by listening to Bill Gates talk about depopulation the world.  You can read about that as well here, from an earlier blog post involving the May 5, 2009 meeting by international billionaires in New York City concerning the topic of "depopulation".