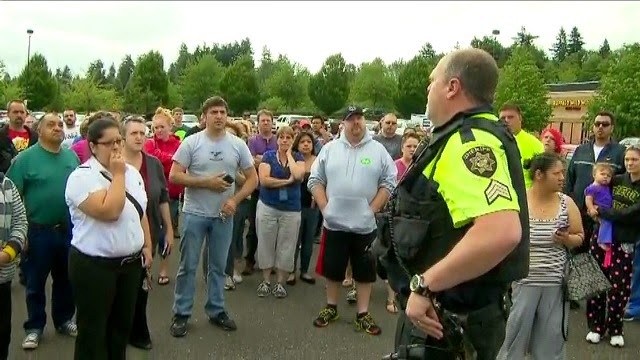 What do you know?  Another day and another false flag shooting.  This time it is in my home state, the 33rd State, with the "33" abbreviation and "74" name.
The shooting is said to have taken place in Troutdale, Oregon, an eastern suburb of Portland, Oregon, at Reynolds High School.  At this time the names of the shooter and deceased victim have not been released.  Like most of these false flag attacks, it is said the shooter killed himself after taking the life of his classmate.

In CNN's reporting on the article, they got a quote from Governor John Kitzhaber about what a terrible tragedy this is.
Kitzhaber can also be decoded with the Pythagorean Method.
I will keep my eyes open for the shooter's name, as well as the victim's.  What do you think the odds are of netting another "33"?  At this time, families of the high school are being asked to meet at "223rd St and Glisan" to be with their children.  Don't overlook that 223, or 322...

Update:  It is now being reported in the mainstream media that this is the "74th" shooting in the United States since the Sandy Hook shooting of December 14, 2012.  The funny thing about this, is Oregon has a name numerology of 74, as shown above.  Also, if you've been paying attention to these shootings, they haven't been saying how many there have been since Sandy Hook, except for this time, and I am sure the reporting of "74" is meant to tie in with "Oregon", but for unsuspecting audiences.
116 Update:  I just had a revelation about the name "Troutdale".  In late March and early April there was a lot of curious reporting involving the number 116; from BitCoin, to buildings blowing up in Spanish Harlem, to kids dead in creeks.  Around this same time I noticed the word "Trilateral" also equals 116.  As it happens, Troutdale, the place of the shooting in Oregon, also equals 116.

Perhaps in this case, the site of Troutdale was chosen for its "116" numerology.
Posted by Zachary K. Hubbard at 12:43 PM