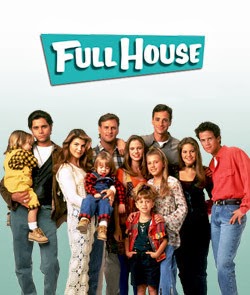 When I was a kid, there was one thing I hated more than anything.  It was the sentence, "I'm going inside to watch Full House."  I never understood it, not for a second.  I couldn't grasp why anyone would possibly want to go inside to watch television when they could be outside playing.  Personally I heard this phrase for years from friends, always much to my chagrin.  It wasn't always Full House they wanted to watch, but often times that was the show that was luring the kids inside to sit in front of the television.  It wasn't until I was in sixth grade, 1994, that I finally saw the show with my own eyes.  Once I saw it, I really couldn't believe it.  "My friends had seriously wanted to go inside to watch this show?" I thought to myself, feeling extremely confused.  I couldn't comprehend it then, and I can't comprehend it twenty years later.

As I've grown older, I've wondered if the television has a psychological impact over much of the population that I am for whatever reason immune to.  When I lived in downtown Seattle for the better part of the 2000s, I would walk the streets and notice how few souls were passing by, but at the same time, how many television sets were glowing from building windows above.  Never in my life have I ever wanted to watch television, other than the occasional sports event - guilty pleasure.  There hasn't been a single show that has ever even appealed to me.  Sure, I've watched some shows on DVD box sets with friends and girlfriends, but at the same time, I could have equally done without them.  I don't understand where people's enjoyment comes from while watching other people's lives on the television in sitcoms.

To me, the television is a box of lies, a distraction and a device that steals your life and its meaning.  Richard Nixon once said that the American people only believe something if it is on the television.  From my experience living in this country, I think he is right and I think that is very unfortunate.  At the same time, I've never thought Nixon's quote is true about me.  On the contrary, I've felt that information from the television is not to be trusted and more likely to be the opposite of the truth.

Since I've turned 18, I've been informed of all the following via television:
What all these events have in common are being deliberate lies.  In all cases, the television and many participating networks, that are all owned by the same Zionists, have sold these lies extremely hard.  The purpose of these lies is to condition us and make us go along with the world they're trying to create around us.  They want us to be fearful, because fearful people are more easily controlled, especially when those people are afraid of the wrong things, and trusting the people they should truly be afraid of.

I'll end this rant by examining the numerology of Full House, and then linking the Super Bowl ad spot, that like other creepy ads from recent weeks, features eerie music while showing the date February 2, 2014- the date of the Super Bowl and the 33rd day of the year.
What I find most curious about the name Full House is the triple 3s coded into 'Full'.  Perhaps, like triple 5s, they attract and persuade the mind.  When you think of big movies, Star Wars is one of the first to come to mind.  It is produced by Lucas Arts.  Like the words full and nuclear, it too has the triple 3s coded within.
Watch the ad and listen to the music as the date is shown.  Then ask yourself, what is up with that?  Last time I checked, Full House wasn't a scary thriller, and neither was the Super Bowl... unless you bet your full house on it.
Posted by Zachary K. Hubbard at 8:44 AM