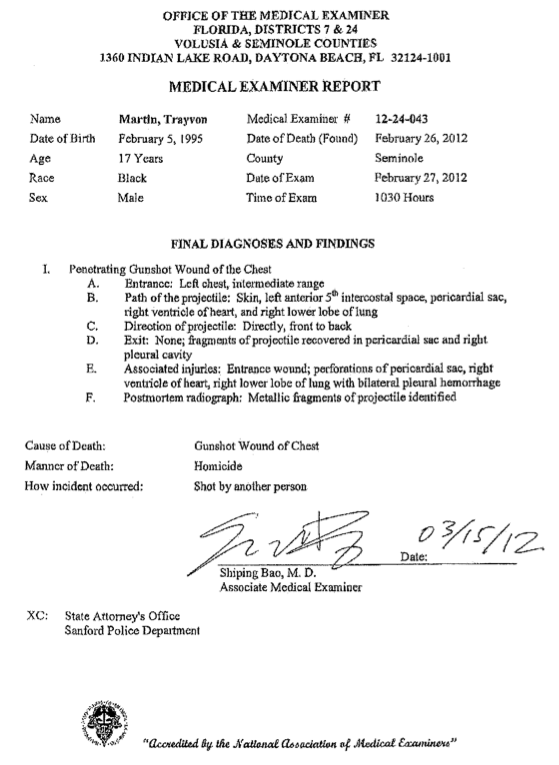 From the moment I heard about the Trayvon Martin murder, I knew something wasn't right about the story.  In a nation where black youth are mistreated and murdered everyday, pretty much without a peep from any media sources, it seemed awfully bizarre that the murder of this one black youth, Trayvon Martin, had not only become the biggest news story in the country, but an event that was being talked about and acknowledged by everything from sports leagues to clothing stores.  Within weeks of the news, the "hoodie movement" was underway, largely thanks to NBA star Lebron James and other media moguls.

Knowing what I know now about numerology and how it is coded into false flag attacks that are reported in our mainstream media, I have taken this knowledge and applied it to the Trayvon Martin murder saga.  Let us begin with the initials of Trayvon Martin and his killer George Zimmerman.

T.M. - T is the twentieth letter and M is the thirteenth.  The sum of the two letters is 33.
G.Z. - G is the seventh letter and Z is the twenty-sixth.  The sum of the two letters is also 33.
The incident between the two men took place on the evening of February 26, 2012.  Trayvon Martin would be buried on March, 3, or 3/3, perhaps another coded 33.  In the trial of George Zimmerman, he stated in his defense, that on February 2, just twenty-four days earlier, he had seen a young black male peeping through a window while he was on neighborhood watch.  The purpose of this testimony was to say that he had suspicion of a young black male who was up to no good in the neighborhood he kept a community watch over  (The community watch program began in September, the ninth month, of 2011).  To me, it seems curious, that in a story already full of 33s, the date February 2, the 33rd day of the year, was used as a justification for probable wrongdoing by Trayvon Martin.  More than a year after the shooting, on the date of 7/13/13, (7+13+13 = 33), George Zimmerman was acquitted of all charges, shocking much of the nation with his innocence.  In my opinion, that was the entire purpose of this likely media psy-ops; to shock and misinform the population.

Other curious happenings in the Trayvon Martin case, was the resignation of the Police Chief on March 22, 2012.  Prior to his resignation, he was overseeing the case.  3/22, is of course the infamous number associated with Skull and Bones.  The Chief would later be officially terminated from his position in June.  Even more curious than that, is that the body of Trayvon Martin was only identified by his father, Tracy Martin, also with initials summing to 33, on March 15, twelve days after the funeral- the same date as the Medical Examiner's report.  Further, the body was only identified by a photo seen by his father as opposed to visit to the morgue to confirm that the deceased was in fact his son.

After reading this you might ask yourself, why would our media and government subject us to fake news reports?  All I can say is because they don't want you to know anything that is real, instead they want to control you with the information they want you to have, for their own political purposes and agenda.  As I stated in the opening, on any given day they could make a major national news story about an unjustly murdered black man or youth, or any youth, of any race, of any religion, but they don't.  The Trayvon Martin story comes at a time when our nation is purposefully being divided and pitted against each other through racially and religiously charged stories and happenings, which the Trayvon Martin case is part of; from the murder of the youth, to the acquittal of the accused.
Posted by Zachary K. Hubbard at 12:33 PM