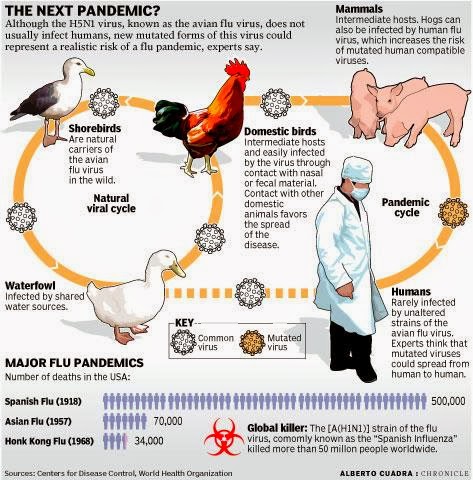 Yesterday, Time Magazine reported that the fist North American casualty of H5N1, the Avian Flu Virus, occurred yesterday, January 8, 2014.  The article believes the virus traveled from China.  On December 27, 2013, it was reported a man died of H7N9 bird flu.  Yesterday, Hong Kong and Guangdong both confirmed new cases of H7N9.  Earlier today, NBC reported that Bird Flu has been dormant since post swine flu 2009.  However, the newly emerging cases show that the virus might have been mutating into something that can spread more easily and potentially cause a pandemic.

On Tuesday, November 7, 2006, the BBC released a documentary about the potential for bird flu to cause a widespread pandemic, reminiscent of the 1918 Avian Flu Virus that killed between 50 and 100 million people.  How about that date for the BBC documentary, November 7, or 11/7?  That documentary can be watched at the end of this post via YouTube.

The 1918 Avian Flu Pandemic began in January of 1918, 96 years ago this month.  The Avian Flu was mostly dormant until it reemerged in 2009.  Recall, it was the year 1913, our nation agreed to the war and destruction for money policy in the Federal Reserve Act, and what followed was World War in 1914 and a worldwide flu pandemic in 1918- call it a coincidence.